Sunday, July 20, 4:00PM - 5:30PM
Congregation Emanu-El
2 Lake Street, San Francisco, CA
Organized for the community by the Jewish Community Relations Council, The Jewish Community Federation and Endowment Fund and the Board of Rabbis of Northern California.As Israel continues to face incessant rocket fire from Gaza and Hamas rejects Israel's offers of a ceasefire, we call on our community to come together for a mass gathering to stand with the people of Israel during this difficult time.The event will include remarks from Israeli Consul General Dr. Andy David, elected officials and community leaders, as well as a moving musical performance.Our thoughts and prayers are with the people of Israel.

UPDATE (from San Francisco Voice for Israel):
We've just been notified that a group of young Israelis from the Peninsula (the Israeli Cultural Connection at the Oshman Family Palo Alto JCC) are organizing a march in San Francisco prior to tomorrow's community solidarity rally at Congregation Emanu-El which begins at 4 PM.  StandWithUs/SF Voice for Israel is delighted to join them in this event.
We are asking people to meet at 2:30 at the parking lot of 3333 California Street, directly across the street from the San Francisco JCC. Parking will be available in this lot or in the SFJCC garage.
We will be bringing some Israeli and American flags, and pro-Israel signs. Please feel free to bring your own as well. Our messages will be that Israel has the right to defend its citizens, that Hamas rocket fire must stop, and that the enemies of peace are those who promote ongoing war in pursuit of a "river to the sea" Arab state.
We will NOT allow any signs calling for violence against Arabs or Muslims in general; just because the other side engages in vicious hate speech does not mean that we will lower ourselves to their level. Anyone bringing such signs will be identified to the San Francisco Police as a provocateur from the other side and removed. A selection of very useful signs can be found at http://www.standwithus.com/signs/.
We will then march to Emanu-El which is 8/10 of a mile away, and attend the solidarity event.
Looking forward to seeing many of you there! 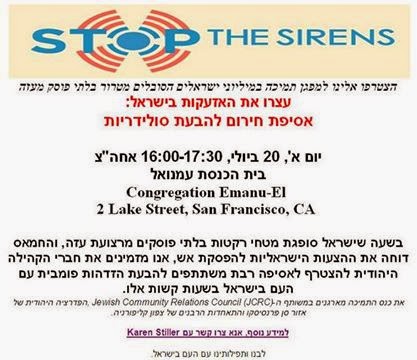