The Bay Stands With Israel


From Dr. Mike, of San Francisco Voice for Israel:

The Bay Area Jewish community is coming together in a way we have not seen for years, to stand together with Israel.  All of our major pro-Israel organizations, and many synagogues and other community groups, are joining together this Sunday.

We want to see a sea of blue and white filling Civic Center Plaza and marching down Market Street. We want to, as Rabbi Abraham Joshua Heschel once famously said, "pray with our feet" as well as with our voices. We want to show the Bay Area that the pro-Israel community is here and that we are strong. We want to hear voices ringing out calling for peace, while understanding that Hamas is the enemy of peace for both Israelis and Palestinians.  We want to show the TV cameras and the newspaper photographers that Civic Center Plaza looks much better supporting a democratic country with civil rights and freedoms, than it does when our opponents use hate speech to support the Hamas regime that oppresses women and minorities and uses its own children as slave labor and human shields.


And we can't see that happening as powerfully as possible without YOU. This is the most important thing you can do this Sunday.
Be there. Civic Center Plaza, San Francisco. Noon to 2 PM. Stand with your friends. Stand with your community. Stand for Israel. 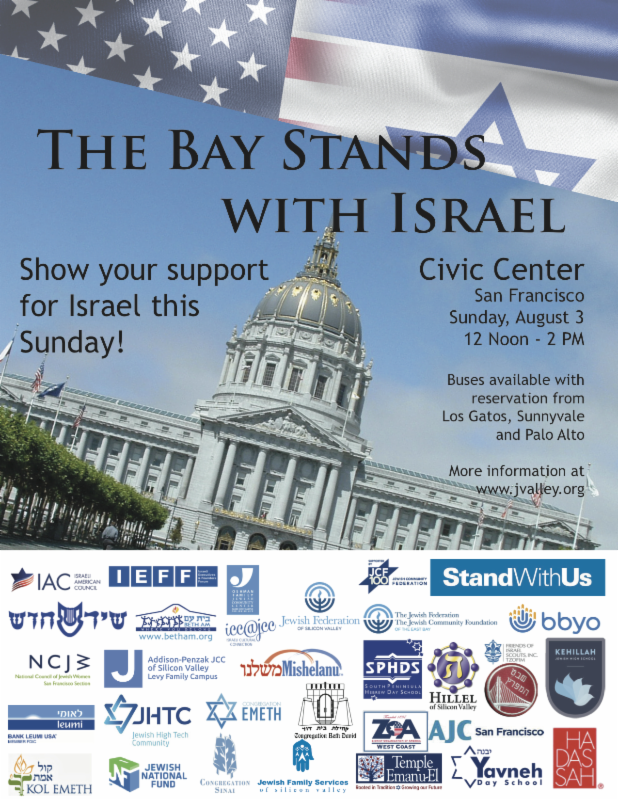 Join  the Bay area Jewish community and their allies in San Francisco's Civic Center Sunday Aug 3 12- 2, as we join together in prayer, in peace and in solidarity with Israel