Our friend at Elder of Ziyon has documented the antisemitism of Mazim Qumsiyeh in the past, writing:

We last wrote about Mazin Qumsiyeh a few months ago, noting that while the academic is constantly referred to as a "peace activist" and while he constantly refers to himself as being concerned for human rights, he fully supports terrorism and calls for the military destruction of Israel.
Well, surprise of surprises, he's also an anti-semite.
From the crazy-left Al-Jazeerah.info site:


I believe it is necessary for all of us to work on all fronts against oppression, whether of fellow human beings or of the environment. I think the issues are related: the same multi-millionaires and billionaires (most of them happen to be Zionist) work to keep people fighting each other, push them towards servitude, poverty, and ignorance while getting rich themselves.

How would you stereotype evil rich people hell-bent on destroying the world for their money grubbing ways? Ah, they must be "Zionist."

Qumsiyeh's website also has a virulently anti-semitic article called "Jewish Power" which he pretends that he doesn't necessarily agree with: " I think it is useful to post controversial material that start discussions and exchanges," he avers.


Mazin Qumsiyeh has just hit bottom. Writing in Facebook on the 20th yahrzeit of the famed Lubavitcher Rebbe's death Mazim Qumsiyeh has compared the renowned Rebbe to Hitler.

The Lubavitcher Rebbe, Menachem Mendel Scheerson may very well be the the most influential rabbi in modern history.  His wisdom, his compassion and his insights have inspired hundreds of thousands. He helped organize outreach programs,  social-service programs and aid to all those in need.  After his death, Congress awarded the Rebbe the Congressional Gold Medal , honoring him for his "outstanding and lasting contributions toward improvements in world education, morality, and acts of charity".
From Chabad:

The Lubavitcher Rebbe, Rabbi Menachem Mendel Schneerson, of righteous memory (1902-1994), the seventh leader in the Chabad-Lubavitch dynasty, is considered to have been the most phenomenal Jewish personality of modern times. To hundreds of thousands of followers and millions of sympathizers and admirers around the world, he was -- and still is, despite his passing -- "the Rebbe," undoubtedly, the one individual more than any other singularly responsible for stirring the conscience and spiritual awakening of world Jewry.

Mazin Qumsiyeh's  appalling disrespect is nothing short of evil, vile antisemitism.  He owes all of us who revere this holy man and all who have benefited from his insights and compassion an apology. 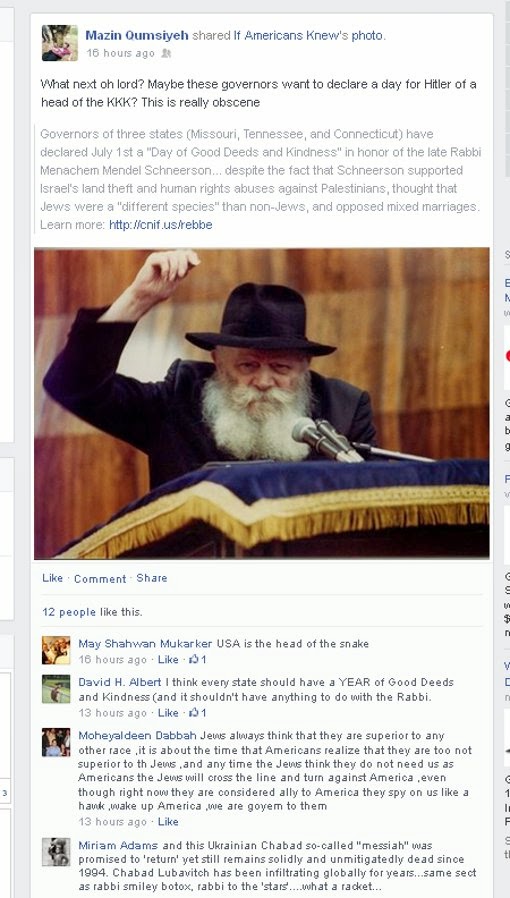 Mazin Qumsiyeh is one of the West Bank contacts for the Olive Tree Initiative, that UC-initiated program that takes students to the Holy land to expose them to "both sides' of the conflict, but which is heavily weighed in favor of the Palestinian narrative.

For those not familiar with Mazin Qumsiyeh, he is a well known Pallywood liar and terrorist supporter.
http://www.fighthatred.com/profiles-in-hate/academics/1146-mazin-qumsiyeh-anti-semite-and-terror-supporter
Mazin Qumsiyeh: Anti-Semite & Terror Supporter
28 FEBRUARY 2013

Mazin would love the ethnic cleansing of Jews form Israel.
Mazin is another Palestinian racist.
Go to this link to read the full article.

"Palestinian peace activist" Mazin Qumsiyeh calls for military destruction of Israel
July 25, 2012
Mazin Qumsiyeh is professor and outspoken anti-Israel activist who has gone on tours of high schools to push his peculiar brand of hate, couched in terms of "human rights." In fact, he even calls his website a "human rights web." He is referred to in countless places as a "peace activist."