Israeli President Shimon Peres delivered a historic speech Tuesday night in San Francisco before a capacity crowd at Temple Emanu'el in San Francisco. This is the first time an incumbent Israeli president has visited the area. Governor Jerry Brown was among the 2,000 people who gathered to hear President Peres. San Francisco Mayor Ed Lee presented Peres with a key to the city.

Tight security thwarted efforts by anti-Israel activists to disrupt the event. Security checkpoints were set up around the perimeter of the synagogue, and people were required to show a photo id and pass through metal detectors. 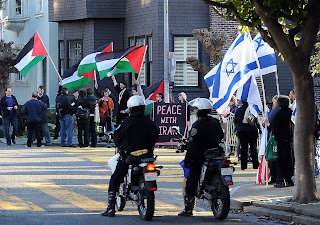 President Peres will spend the rest of his visit visiting innovative high tech businesses in the area to explore the use of social media as a tool to advance the peace process. In particular, he has expressed a desire to connect with young Arabs to help advance chances for peace in the Middle East. Peres will be in the Bay Area through Thursday.

Not sure what qualified this young woman to speak for Jews and Americans: 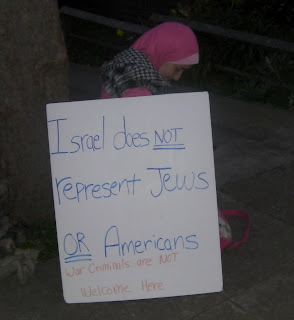 This evening proved her wrong, as 2,000 Jews and allies at Temple Emanu'el rose as one to recite the prayer for the State of Israel. Led by Congegation Beth Jacob's beloved Rabbi Judah Dardik, they prayed:

Our Father in Heaven, Rock and Redeemer of the people Israel; Bless the State of Israel, with its promise of redemption. Shield it with Your love; spread over it the shelter of Your peace. Guide its leaders and advisors with Your light and Your truth. Help them with Your good counsel. Strengthen the hands of those who defend our Holy Land. Deliver them; crown their efforts with triumph. Bless the land with peace, and its inhabitants with lasting joy. And let us say: Amen.
Posted by Dusty at 11:00 PM

somebody outta tell that moron with the sign there that code pink doesn't represent Jews either. unless those Jews happen to be part of JVP. but then again JVP sure as Hell doesn't represent America or most any Jews in the world who operate on at least a little more then a few brain cells.

Nice photos and commentary from Zombie: