Iran Behind 'Global March to Jerusalem' 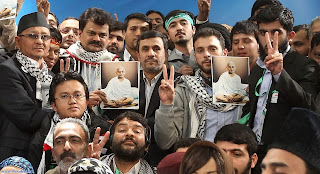 According to the Meir Amit Intelligence and Terrorism Information Center (ITIC), Iran is the organizing force behind the latest high profile publicity stunt aimed at the delegitimization of Israel. The Global March to Jerusalem, planned for March 30, is an initiative that aims at getting over one million Arabs and their supporters to attempt to infiltrate Israel’s borders.

From an article by Elad Benari

"ITIC is presenting evidence in its possession which indicates that Iran openly and with its own propaganda supports the March 30 events and is also involved in organizational preparations for the marches. To that end, ITIC said in a report posted Wednesday, Iran employs proxies, including organizations and individuals.
The center quoted an item dated February 26, 2012 in the Fars News Agency, in which Iran’s supreme leader, Ayatollah Ali Khamenei, was quoted as supporting the march to Jerusalem.
In the report, Khamenei said Iran should openly support movements and groups operating against Israel. Support for the marches to Jerusalem was presented as part of a new strategy designed to increase regional unity against Israel, based on the so-called “resistance axis” (i.e., Syria and the terrorist organizations) and opposition to the so-called "occupation" of Jerusalem.
In the same vein, a report in the Iranian ISNA agency, dated March 4, quoted Ghzanfar Asl Roknabadi, the Iranian ambassador to Lebanon, as saying he hoped all “Palestine” would shortly be liberated from its “Zionist occupiers” and that cries of “Allahu Akbar” would be heard throughout Rehavia, an elite neighborhood in west Jerusalem.
ITIC noted that a local committee was appointed, in Iran and other Arab countries, to make preparations for the marches. The committee, called The Board of the Global [March] to Jerusalem, is headed in Iran by Hossein Shaikhol-Eslam, who ITIC noted is likely directly connected to the Iranian regime.
The ITIC report also cites the Haganah website, which is run by American professionals specializing in the analysis of jihadist Internet sites. Haganah examined the Global March to Jerusalem website and found indications of Iranian involvement in the marches.
Haganah found three domains of march organizers sharing an IP address with Ahl al-Bayt, an Iranian institution directed by Khamenei's office and which spreads Shi'ite and Khomeini ideology around the globe. It is headed by Khojat el-Eslam Mohammed Hassan Akhtari, the former Iranian ambassador to Syria.
ITIC also cited an Iranian website, believed to be connected to the Iranian regime, which initiated a cartoon contest in support of the marches.
The cartoons are supposed to deal with the theme of the so-called "right of return" of the Arab refugees and with opposition to the so-called “occupation” of Jerusalem. Each of the three winning entries, ITIC noted, will receive a prize of $1000 and a trophy.
The report also noted that the Iranian English-language Press TV channel was also enlisted to promote a propaganda campaign for the marches.
On January 8, 2012, a video was posted on YouTube to promote the marches, produced by Press TV and featuring former British MP and pro-Hamas enthusiast George Galloway.
Finally, ITIC noted, another manifestation of Iranian participation in the propaganda campaign for the march was an open letter posted on the marches' website on March 5, purportedly written by Iranian Jews. The ITIC believes the letter was planted by the Iranian regime.
The letter’s heading was the Society of Iranian Jewry Supporting GMJ and it was purportedly signed by two Iranian Jews, one a Jewish member of the Majlis (the Iranian parliament) and the other a Jewish leader. In it, the Society of Iranian Jewry expressed support for what the letter called “a global demonstration in support of the liberation of Jerusalem from the Zionists.”
Posted by Dusty at 1:57 PM