From our friends at San Francisco Voice for Israel, the Bay Area Chapter of Standwithus

Join Standwithus/San Francisco Voice for Israel as we counter a protest in front of the Israeli Consulate. Local extremist groups including Al Awda and International ANSWER have called for a protest in solidarity with the Global March to Jerusalem, the latest high profile publicity stunt that seeks to storm Israel’s borders on March 30, 2012. The march has been orchestrated by leaders of the Muslim brotherhood, the Islamic Republic of Iran and the members of the Fringe Left, who deny the Jewish peoples' historical, cultural and religious ties to our holiest city, and have demanded the end of the so-called "Judaization of Jerusalem". Just last month local organizers invited notorious anti-Semite Gilad Atzmon to the Bay area as a fundraiser for the Global march to Jerusalem. Atzmon has been widely condemned across the political spectrum for his racist views. Organizers have called for demonstrations at Israel’s consulates , declaring the "GMJ will siege Israel and its embassies over the world."


Please join us in front of the Consulate, 456 Montgomery St San Francisco this Friday, March 30 from 4- 6.
Stand with us
Stand For Peace
Stand with Israel


We encourage you to bring your own signs and flags to this action, but ask you not stoop to the opposition's level of hatred by holding signs that disparage Palestinians, Arabs, or Muslims (or any other ethnicity) as a group. It is very important that those who join us refrain from engaging in confrontations with the extremist groups organizing this event. Also we specifically dissociate ourselves from anyone delivering any hate speech or threats to those on the other side and we ask that those in attendance let us know of anyone violating these guidelines.


This is what we'll be countering 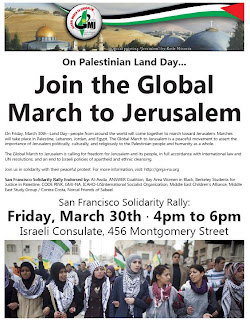 I assume that you have no problem with me cross-posting this at Israel Thrives.

And I will, in fact, try to make the event myself.

Wow, what an awesome blog. Its very cool that there could be a blog like this in San Francisco, which I ass ociate in my mind (wrongly perhaps) as a mecca of the usual anti-Israel claptrap! Hope the march went well. Josh

Wish I could make it! Love to be there! We are having a demo too but here in London, on 30th March. good luck and don't forget to post videos!! Am chai Yisroel!!

Juniper- My prediction is that there will be more people protesting in london than ammassing on Israel's borders. Take lots of photos.

Wish the group hadn't disbanded. The haters have been running amok on the streets without San Francisco Voice for Israel out there to counter them. Its understandable- I heard they never really got over Dan Klimans's death.