From CIF Watch: Fact Sheet on the Global March to Jerusalem

The March 30 Global March to Jerusalem represents not only an assault on the sovereignty of Israel, but an assault on her embassies and consulates worldwide. From the Palestine foundation Pakistan "GMJ will siege Israel and its embassies over the world." Arm yourselves with the facts and start preparing for the "siege" of your local Israeli embassy or consulate now.

Our friends at CIFWatch have done all your homework for you.

What is the Global March to Jerusalem (GMJ)?

GMJ, scheduled for March 30, 2012, is an anti-Israel publicity stunt that aims to have a million people marching on Israel’s borders from all the surrounding countries – Lebanon, Syria, Jordan and Egypt – with the aim of reaching Jerusalem. Concurrently, demonstrations are planned in the Palestinian-administrated territories and against Israel’s diplomatic missions in major cities throughout the world.

Who is organizing GMJ?

The organizers of GMJ are made up of members of Hamas, the Muslim Brotherhood, far-left extremist groups and are backed by the Iranian government. Senior organizers include:

■Ahmed Abo Halabiya, a Hamas MP who in 2000 gave a sermon saying “Have no mercy on the Jews, no matter where they are, in any country. Fight them, wherever you are. Wherever you meet them, kill them.”
■Zaher Birawi, a prominent Hamas activist in the UK and senior member of the Muslim Brotherhood linked Palestinian Return Center.
■Abdul Maqri, head of the Algerian delegation aboard the Mavi Marmara who in 2010 said “all our blood is Palestine” and declared that “Israel will be annihilated soon”.
■Saud Abu Mahfouz, member of the Muslim Brotherhood’s Islamic Action Front in Jordan who is on record for stating “We see Hamas movement in Palestine as standing at the head of the project of the Arab and Islamic liberation for which the Muslim Brotherhood calls”
Advisory board members include George Galloway, Rev. Jeremiah Wright, Archbishop Desmond Tutu, Mairead McGuire, Mahathir Mohammed and Sheikh Raed Salah.

What are the objectives of GMJ?

Official statements of the organizers of GMJ attempt to portray the movement as a peaceful protest aimed at highlighting the so-called “Judaization of Jerusalem”.

In practice, the right of return is a rejection of the two state solution and subterfuge for the destruction of Israel as the nation state of the Jewish people. Coupled with that, employment of the term “Judaization of Jerusalem” is hateful rhetoric designed to negate thousands of years of Jewish history and incite the Muslim world.

Haven’t there been attempts to breach Israel’s borders beforehand?

Yes. During 2011 there were two separate attempts to march on Israel’s borders mainly from Syria, one on May 15 and another on June 5, both of which turned violent resulting in dozens of deaths and hundreds injured.

Like every other sovereign nation, Israel has the right to control who enters its borders and to protect its borders from being breached.

Should we be concerned about GMJ?

Absolutely. With a bloody uprising in Syria, a Muslim Brotherhood dominated Egypt, the looming Iranian nuclear threat, a failed peace process and recent renewed violence from Hamas-controlled Gaza, the situation is highly volatile. Combined with the extreme terror groups behind GMJ and the rallying cry of “saving Al Aqsa (Jersualem) from the Jews”, it is our assessment that with sufficient numbers the organizers will seek violent confrontation with Israeli forces with the aim of sparking a Third Intifada

How do I find more about GMJ?

We have established a special website at www.gm2j.co which contains detailed information about GMJ, profiles of the organizers, lists of endorsing organizations and a regularly updated blog.

"GMJ will siege Israel and its embassies over the world."

Except you can't talk that way and get Americans to support you. So, not surprisingly, the Global March to Jerusalem has toned own its rhetoric when attempting to appeal to the American public. Instead of ralling against the "judization" of Jerusalem, they evoke Gandhi and King, and the civil rights movement.
Check out their new trifold, especially modified for the American palate: 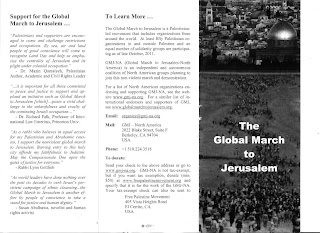 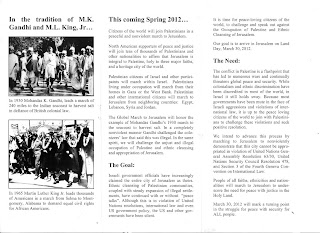