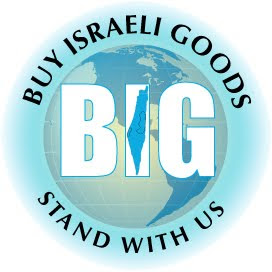 Celebrate and Support Israel on March 30, 2012 and everyday. In an effort to counter a global anti-israel Boycott day, scheduled for this Friday, March 30, we are urging everyone to buy israeli products. 333

From a press release by Standwithus

"We need to show the boycotters that their efforts remain doomed. Let the boycotters know that when they call for boycotts of even one or two stores or products, they will face a much larger movement to buy Israeli goods," said StandWithUs co-founder and CEO Roz Rothstein. "We are telling people to go to their local stores, request the exact Israeli products being targeted, and buy them out. Let store managers know they should keep Israeli products well stocked on the shelves."

StandWithUs, in partnership with the American-Israel Chamber of Commerce, successfully countered similar boycott days in 2010 and 2011. They mobilized Israel supporters in every store that the boycotters had targeted worldwide. Shoppers bypassed the protesters and bought out entire Israeli product lines. Delighted store owners said it was their best shopping days and promised to keep their shelves stocked with the targeted products.

March 30, 2012, is an opportune day to purchase Israeli products because the Jewish holiday of Passover is in April this year. Shoppers can choose presents from the wonderful array of Israeli-made items, from fine Israeli wines to the high-quality Ahava beauty products, Israeli-made jewelry, shoes, clothes, and food, including Sabra or Tribe hummus and Osem cookies.

"We must defeat the boycotters who advocate destructive, instead of constructive, measures, who undermine hopes for peaceful coexistence, and whose only goal is to cripple and damage Israel by hurting Israeli citizens," Rothstein emphasized. "We can only do this by joining together to be part of a BIG campaign like this."

Standwithus isn't the only group promoting a buycott in support of the state of the Jewish people. Check out this new release from Synonymous
They state:

We are the people that seek to end anti-Semitism.

We are the people that hid the Jews from the Nazis.

We are the churches.

We are the synagogues.


On March 30, 2012 and always support Israel. For a list of business that sell Israeli products, visit the Buy Israeli Goods website
Posted by Dusty at 10:41 AM

i'll be stocking up on BAMBA that day! all you BDS SOBS can kiss my big fat unapologetic pro-Israel ass.

A new message from Synonymous!