PROTEST IN FRONT OF CONSULATE TODAY

About one hundred and twenty of the usual folks on the anti-Israel side, including the most brain-damaged resident of Telegraph Avenue, plus Richard Becker, Forest Schmidt, and several middle-aged Berkeley women with sad empty lives and a thing for Levantine boys.
Oh, and the Levantine boys - but they seemed a bit drab and irrelevant.
Also three charming young damsels with flashing eyes who really appreciated my waving a shoe at them.  They screamed, smiled, and waved.

Hi ladies.  Anytime you want to talk about foot-wear, I’m ready.
You look like you’d be tons of good wholesome fun.
And you probably have lovely feet.

One Arab teenager on the hatefilled side is in the running for a Darwin Award.
Getting hit by a truck for playing in traffic is a horrible way to become a shahid, but if you’re that unlikely to ever become a useful member of society, your parents will simply have to accept it.  Better than nothing, I guess.
They can always use that four-coloured battle rag as a shroud.
For their sake it should happen soon.
You eat too much.

Richard Becker spoke at one point. Something inane about revolution and struggle, a short and relatively mild version of his usual Marxist piffle.  Either he or his dogsbody Forest have probably realized that the dear ladies from code pink can’t grasp anything complicated, the angry Arab teenagers can’t spell it, and the middle-aged gentlemen of pro-Hamas convictions simply ignore it as typical prattle from a useful idiot.
You’re on their list, Dicky.

BTW, why is Forest so red-faced?  High blood pressure?  Frustration?
I worry about him, he’s looking unhealthy.
So do you, Richard.


Seventeen signs produced by International A.N.S.W.E.R. - printed years ago and ragged from re-use.
Organizers: ANSWER, Code Pink, AROC, and the International Socialist Organization.
More than half a year in the making.
Tons of amusing e-mails.
Four Pally flags.

Our side had way more flags, Richard.  Israeli flags.  As well as more intelligent signs.

And as usual even a few of us are more than a match for your revolutionary wannabe drones.
Just remember that most of us have jobs, Richard, and are well-adjusted.
Whereas you associate with juvenile delinquents.
And the ladies of Code Pink.
Plus Forest Schmidt.
How horrid. 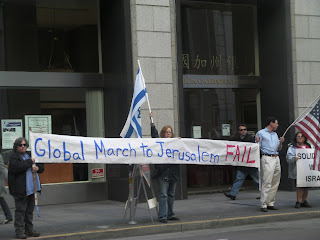 Hehehehehe!! very funny! Good to take the p out of the muzzbots! Loved the bit about waving the shoe!!

Oh Lord, sounds like a good time was had by all.

I wonder how Paul Larudee, one of the organizers of the GMJ, spent his day. Perhaps in the custody of Jordanian or Lebanese security? Perhaps enjoying the hospitality of the Assad regime in Damascus?

We can only hope that on his return to the US, he is at last taken into custody for his association with extremist terror groups.