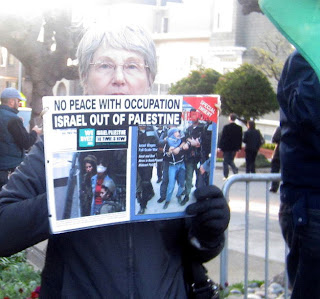 This photo from Zombie at Pajamas media shows Marina Gutierrez of Berkeley Women in Black at a protest in front of Temple Emanu'el.

Marina is a regular at anti-Israel protests throughout the Bay area. Look for a minute at the photo she is holding. It is a young boy, clearly terrified that has wet his pants. This photo is meant to show the big bad abusive Israeli soldiers, terrifying innocent children. But wouldn't a little more context be nice?

Check out United With Israel's page on How To Check If A Photo Is Current. Using the techniques at this website, we learn that Marina's photo is from 2001. Yes. Its 11 years old. But more context is needed, still. From the Picture that moved Hearts 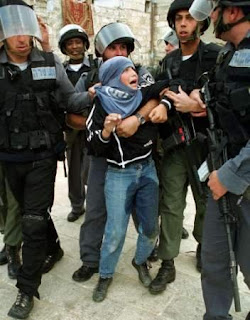 This Picture was taken near the Temple Mount in Jerusalem, on Friday, April 6, 2001, by Evelyn Hockstein, a Reuters photographer.

"A Palestinian child was caught by Israeli policemen, and, in his fear - he wet his pants.
Undoubtedly, this picture is very moving, and everyone can share the pain and panic of the child, that led to such an embarrassing moment.

The Palestinians, who truly understand the power of the image, spread this picture worldwide, through the media and e-mails, but - they did not show the other picture.

A few minutes before the above picture was taken, another Reuters photographer, Natalie Behring, had taken the following picture -- which was not as widely distributed (please notice the child in the center of the pic) 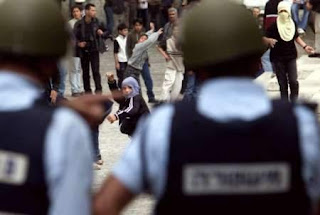 Well, yes, it's the same child. Only at this stage, we may assume that his pants were still dry..."
Posted by Dusty at 10:31 PM

Check out this new passover video on youtube.
Its filmed in Israel and very inspirational music!
http://www.youtube.com/watch?v=u0UN_06tess