One Republic, the Colorado pop rock band is now touring Israel, and its enough to make the BDS holes gnash their teeth in despair. 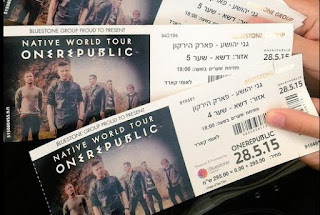 Its not just a hit and run concert. They are taking time to tour the Holy land,  and if their comments on social media are any indication, they are impressed.

Today One Republic visited an Iron Dome missile defense system base in Ashkelon, and took time to pose with the soldiers. 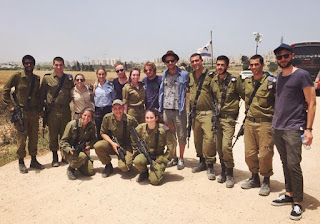 The visit to the Iron Dome soldiers' base was part of the band's Israel tour, in which they visited Tiberias and Kibbutz Ginosar, Caesarea, and an IDF base on the Golan Heights

Sources close to the band members said they were impressed with the religious sites and claimed there was a significant gap between how Israel was presented in the news abroad and their personal impression of the Jewish state.

Expected in Israel, later this summer:
• Singer songwriter Suzanne Vega will give two concerts with the Israel Philharmonic Orchestra at the Mann Auditorium in Tel Aviv on June 9 and 10, 2015. Tickets are on sale via Eventim.
• Art Garfunkel from the legendary duo Simon and Garfunkel, has announced a performance date in Israel at the Bloomfield Stadium, Tel Aviv - June 10, 2015. Tickets range from NIS 299 to NIS 1,000 and are on sale through www.leaan.co.il.
• Reggae star Damian Marley will also perform in Rishon leZion - on June 24, 2015. Tickets are on sale at Eventim.
• Dire Straits band leader Mark Knopfler will perform alongside Chris White and other international musicians on June 27, 2015 at the Tel Aviv Fairgrounds Hall 2. Tickets are on sale via Eventim.
Posted by Dusty at 10:32 PM