BDS has reared its ugly head again at the Park Slope Food Coop,  promoting a Sodastream boycott with a rather Orwellian twist of language. How can you not marvel at the twisted  mental and moral gymnastics required to call the boycott  " food justice"  for "people of color",  when the reality is exactly  the opposite?

The Sodastream boycott has already cost 950 Arabs their jobs and their livelihoods. 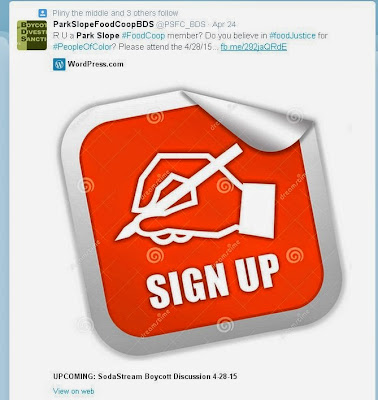 From the Park Slope BDS Facebook Page. The timing was particularly interesting, as Sodatsream is scheduled to move to a new factory later this month. 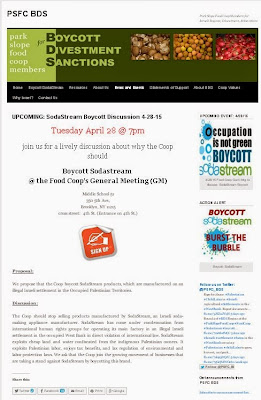 The coop meeting was characterized by all the vitriol we've come to associate with BDS inserting its ugliness into our beloved neighborhood institutions and  civic organizations. This time, it was the aftermath that made it particularly special.

Writing in the Independent, a local BDS hole blamed the failure of BDS at the Park Slope Food Coop on (you guessed it) the Jews.

From the New York Daily News:

The fact that some people spoke up stridently against the boycott didn't sit well with BDS proponent Ann Schneider, who lamented in a post at the Indypendent:

"I talked to my friend, another long-time member, Carol Lipton. She reminded me that the Coop had a membership drive in the 90's and reached out to Borough Park, rather than Red Hook, Sunset Park or Brooklyn's Chinatown.

"While we have worked for four decades to create a community based on cooperation, equality, diversity, organic farming and sustainability, ‘we've incorporated members whose core values are the antithesis of ours, except for the common denominator of concern for healthful and cheap food,' Lipton said."

In other words: Those damn Borough Park Jews ruined everything.