Institute for Black Solidarity with Israel : Responding to trolls

Thanks to our friends at the Institute for Black Solidarity with Israel for pointing out the inherent racism that lurks in the heart of many anti-Zionists. IBSI is dedicated to strengthening the relationship between Israel and the Jewish people, and people of African descent through education and advocacy. Check them out on Facebook

Dr. King was a pro-Israel friend of the Jewish people. There is an abundance of historical evidence to support this fact. True to his call as a champion of justice, he was also an advocate for the self-determination and well-being of the Arab (Palestinian) population. In Dumisani Washington’s upcoming book "ZIONISM & THE BLACK CHURCH: WHY STANDING WITH ISRAEL WILL BE A DEFINING ISSUE FOR CHRISTIANS OF COLOR IN THE 21ST CENTURY” he will discuss in detail Dr. King’s Zionist views, and why we can safely speculate on his stance if he were here today.

Provided is a link to one of Dr. King’s final public appearances before his assassination. In this document are some of the civil rights leader’s most powerful words supporting the Jewish State.

[On the evening of March 25,1968, ten days before he was killed, Dr. Martin Luther King, zikhrono livrakhah, appeared at the sixty-eighth annual convention of the Rabbinical Assembly. He responded to questions which had been submitted in ad­ vance to Rabbi Everett Gendler, who chaired the meeting.

[Here is a transcript of what was said that evening, beginning with the words of Professor Abraham Joshua Heschel, who presented Dr. King to the assembled rabbis.]

In response to the words of tolerance and vision from Dr. King, an anti-Israel troll responded

The IBSI did not take the bait, however, and responded in a way that honored the heritage and the legacy of Dr. King. 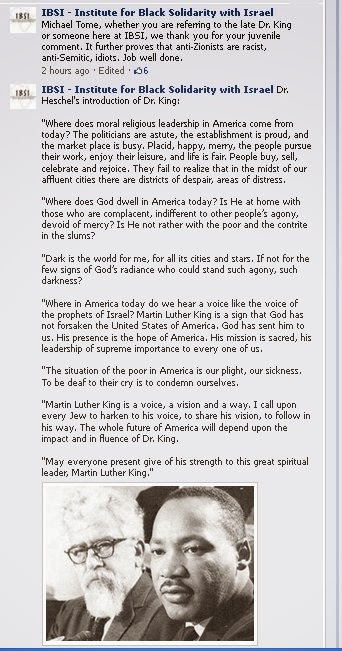 In spite of their best efforts,  IBSI's page is being over run by trolls. Stop by,  like it, and thank the group for its support.

UPDATE:
An apology and a moment of redemption. 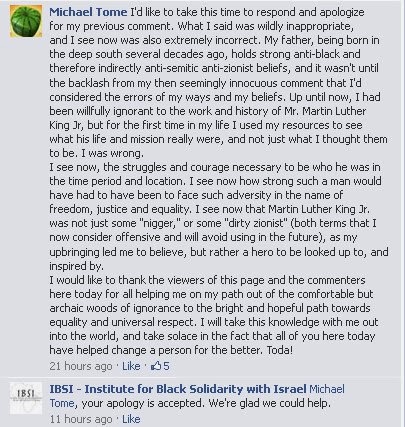 Check out the repentance note by the guy who left the "n-word" comment originally. It does leave one with hope that people can change for the better.