The Bay area is reputedly the most liberal area in the nation. Tolerance, diversity  and individual human rights are valued.  That is why the appearance on nearly every light pole in Montclair Village of flyers depicting a Jewish Oakland Councilmember emblazoned with swastikas was particularly shocking to community members.  It was particularly ironic that these hurtful and offensive flyers made their debut on the day we commemorate the achievements and vision of Dr. Martin Luther King. 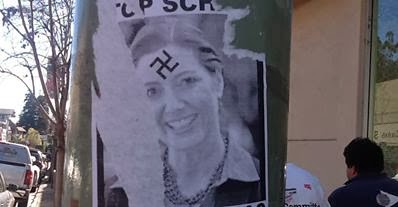 
The councilwoman, Oakland native Libby Schaaf, said she found the fliers displayed Sunday on Mountain Boulevard in the city of Montclair “very hurtful.”

"It's very hurtful, especially as a person of Jewish heritage, to see tour face with a swastika on your forehead,” Schaaf said. “I'm very proud of that heritage and I know there's a large community of people that really were hurt having to see that."

The postings appeared to be a response to the city's plan to create a surveillance center, which would allow authorities to monitor streets through multiple surveillance forms, such as cameras and gunshot sensors, in order to help detectives solve crimes.

Libby Schaaf  has expressed privacy concerns over the Domain Awareness Center and believes the flyers misrepresent her position. She feels the attack is personal.


"The attack does feel personal because the issue is one that they misrepresented my position on it, Schaaf said.

Schaaf said she is most concerned about the impact on her two young children. She said she would likely talk to them Monday night.

Schaaf said her family spent the day talking about MLK day and about the importance of tolerance, love and acceptance. 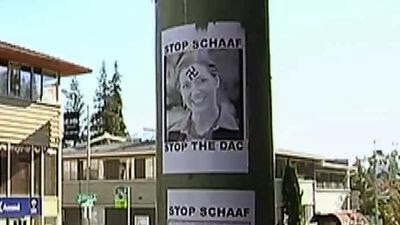 i heard about this on NPR. ya know that really says something when incidents of anti-Semitism are more likely to occur in "liberal" regions of the country then in areas that are traditionally more associated with racism and other prejudices like the south.

The Bay Area Left is sickeningly antisemitic and intolerant. I left the Left a long time ago for just that reason. They're Thought Police fascists and bigots.