Sorry to burst your bubble, BDS. Scarlett Johansson has parted ways with Oxfam

Citing “a fundamental difference of opinion” over the anti-Israel Boycott, Divestment and Sanctions (BDS) movement, Actress Scarlett Johansson has ended her relationship with Oxfam International, an organization with a history of distortions and half-truths on the Israel/Palestine issue. Johansson had served as a global ambassador for Oxfam since 2007.

“Scarlett Johansson has respectfully decided to end her ambassador role with Oxfam after eight years,” her statement said. “She and Oxfam have a fundamental difference of opinion in regards to the boycott, divestment and sanctions movement. She is very proud of her accomplishments and fundraising efforts during her tenure with Oxfam.”

Earlier this month  the 29 year old actress signed on as the first global brand ambassador of SodaStream International Ltd.. She's been under fire ever since. The continual harassment included disgustingly sexist remarks from Seattle blogger Richard Silverstein and his supporters via social media 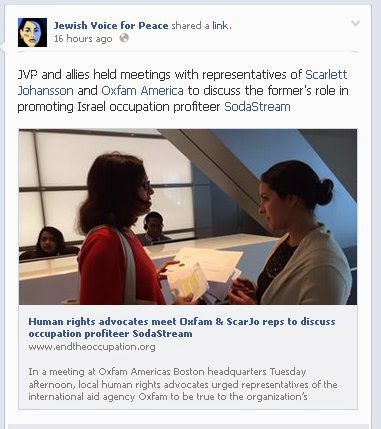 In response to the criticism, Johansson said last week

"I remain a supporter of economic co-operation and social interaction between a democratic Israel and Palestine," said Johansson. "SodaStream is a company that is not only committed to the environment but to building a bridge to peace between Israel and Palestine, supporting neighbours working alongside each other, receiving equal pay, equal benefits and equal rights."

Jewish Voice for Peace turned on both Oxfam and Scarlett Johansson after the decision was announced. 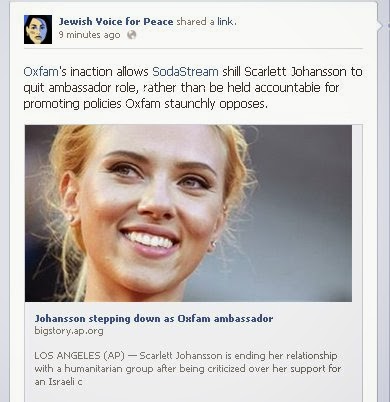 In response, social media erupted with the inevitable "Even when we lose, we win" announcements.

Her Sodastream debut will be during Super Bowl -Sunday Feb. 2. Preview it here.

Its been out for two days, and its been viewed over 4 million times. I'd call that a BDS fail.
Posted by Dusty at 11:21 PM