The United Nations Relief and Works Agency (UNRWA)exists to perpetuate the Palestinian refugee problem, not to solve it.

Speaking at UC Berkeley, on Nov. 4, 2013 Filippo Grandi, Commissioner General of the United Nations Relief and Works Agency admitted the role of his agency in perpetuating the plight of Palestinian refugees, describing the "core job" of UNRWA as  keeping the Palestinians "registered".

UNRWA  bestowed refugee status on the 3rd and 4th generation, on the grandchildren and great granchildren deeming them “refugees,” As a result, the Palestinian refugee population has grown from 750,000 in 1950 to 5 million today. The Palestinians are the only people in the world today who can inherit refugee status

UNRWA defines a refugee, not as someone with indigeneous staus, but rather,  as “persons whose normal place of residence was Palestine during the period 1 June 1946 to 15 May 1948, and who lost both home and means of livelihood as a result of the 1948 conflict.”  Yes, you read it  right.  Living in pre-state Israel just  for two years or longer qualifies  Palestinians and their descendents with millions in goods and services, and has, for generations.

Their services are available to all those living in its area of operations who meet this definition, who are registered with the Agency and who need assistance. The descendants of Palestine refugee males, including adopted children, are also eligible for registration.

According to the report, the British government contributes 90 million pounds annually in aid to the Palestinians. A third of that sum is earmarked for UNRWA – the United Nations Relief and Works Agency for Palestinian refugees.

The parliamentary committee was formed in response to heavy lobbying by pro-Israel organizations and with the encouragement of former Israeli Labor MK Einat Wilf. The committee is due to submit its recommendations to parliament soon.

"UNRWA is perpetuating the notion that the descendants of refugees are themselves refugees, and it is based on this principle that the Palestinians are demanding the right of return, something that will not happen in any future agreement," Wilf said.

"The main point is that UNRWA is entirely supported by Western countries whose official policy is to aim for a two-state solution," Wilf said. "This is completely in contradiction to the idea of a right of return for 5 million refugees and their descendants to Israel."

Time for our Congress to recognize that reality, as well. 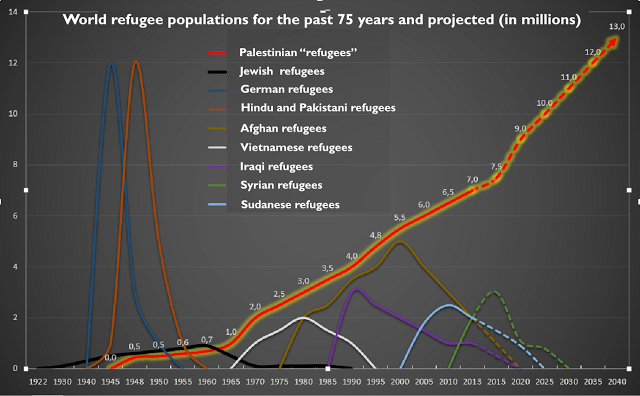