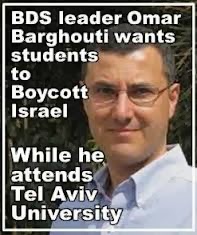 Omar Barghouti been doing the California college tour scene the last few days, before he becomes the BDS spokesmodel for the extremist Sabeel organization.

From the Jewish Journal, written by Roberta Seid
Omar Barghouti brings hate and bigotry to UCLA

Much of his litany of false accusations he’d presented before, cherry picking anomalous examples or making up “facts” such as that Israel steals Palestinian water (it gives Palestinians 30% more Israeli water than it even agreed to give in the Oslo Accords), that checkpoints are choking Palestinians (B’Tselem, an Israeli human rights group very sympathetic to the Palestinians, reports there has been free movement in the West Bank for the past few years and the Israeli government reports that only nine checkpoints remain which are manned only during terrorist alerts).  He likes inventing terms to make his accusations seem more sinister.  Absurdly claiming Israel is systematically destroying Palestinian education, he accused it of “scholasticide,”  and omitted the fact that he himself attended graduate school at Tel Aviv University.  He praised the American Studies Association’s vote for an academic boycott of Israel, claiming it showed BDS was succeeding, despite the fact that the most prestigious American academic associations and over 200 major universities unequivocally condemned the resolution as an assault on academic freedom and an unfair singling out of Israel.

But Barghouti didn’t stop there.

He hurled blood libels. Israeli soldiers shoot Palestinian children “for sport.”  Indeed, they “provoke” the children, “entice them like mice, and then shoot them” for no reason.  Often, it is just because the soldiers are “bored.”

He justified terrorism against Israelis, defending the Palestinians’ right to “resistance by any means, including armed resistance.”   When he insisted that the only way to end terrorism was to end the “root cause”—that is Israel’s alleged oppression of Palestinians-- the audience erupted into finger snapping, is the way college audiences show approval.

He shamelessly told lies. When asked how Israel could be called an apartheid state given the prominent positions of Israeli Arabs in government and the judiciary, he snapped back that every evil system has its collaborators. He claimed there were even Jews in the Nazi government.

He declared that many large Jewish communities don’t accept a Jewish state, and cited a Satmar rabbi for proof.  When UCLA Hillel Rabbi Chaim Seidler-Feller interrupted to protest that the Satmars are only a fringe group that doesn’t represent the vast Jewish community, the organizer reprimanded him and threatened to have him removed. The Rabbi stormed out, declaring “This is anti-Semitic!”

Barghouti repeatedly denied that Jews are one of the indigenous people of the region. When an Israeli stood up and said he is a 10th generation Israeli and indigenous, Barghouti scoffed.  “You aren’t indigenous just because you say you are.”  He allowed that colonialists could be indigenized but only if they melded and intermarried with the existing society, not if they sought to disenfranchise the real indigenous people.  The Boers, he explained, described themselves as an indigenous  people when they fought British colonialism.

He denied that the Jewish people have a right to self-determination. They are not a people, he declaimed, and the UN’s principle of the right to self-determination applies only to colonized people who want to acquire their rights. While he insisted that Palestinians must have “the right to have rights,” he denied that the Jewish people had any collective rights.


From the AMCHA Initiative:
Barghouti  brings the Boycott Message to UC Riverside

Two of us (Rabbi Singer and Rabbi Cohn) attended the talk by Omar Barghouti on Tuesday, which was sponsored by the UCR College of Humanities and Social Sciences (CHASS) and the Department of Ethnic Studies....

As we feared, Omar Barghouti's talk was pure propaganda and political screed, whose unambiguous purpose was to demonize and delegitimize the Jewish state and actively promote the academic boycott of Israel.  For example:

Barghouti called Zionism "a racist European ideology that was adopted by the dominant stream of the Zionist movement...in order to justify and politically recruit for its colonial project of establishing an exclusive, supremacist Jewish state in historic Palestine," and he claimed that most Israelis view Palestinians "as less than human."

He accused Israeli soldiers of "hunting children," saying that sharpshooter Israeli soldiers target Palestinian children and shoot to kill, and that the soldiers "entice them like mice" into playing football and then shoot them with silencers.

He accused "Israel and its well-oiled lobby groups" of "buying and paying for allegiance" and controlling the media, saying: "Just open any TV channel, read any mainstream paper, and it's all Israeli propaganda." He also said, "Israel's lobby works overtime to fabricate, to vilify, to intimidate -- that's just the nature of the beast."

He compared those who criticize the BDS movement to "those white Americans who pushed back against the Montgomery bus boycott," implying that anyone who criticizes the boycott of Israel is a racist.

He praised the student senate at UC Berkeley for passing an anti-Israel divestment resolution, and said to the students in the room, "We hope you are next!"

Barghouti was not interested in imparting knowledge to the UCR students in the room who came in fulfillment of a CHASS course requirement.  Rather, his unmistakable purpose was to indoctrinate them with a hatred of the Jewish state and those who support it, and to win their hearts and minds to help advance the Palestinian campaign to boycott Israel.


The reports are disturbing, but are true to character not only for Omar Barghouti, but for the entire BDS movement
Posted by Dusty at 7:26 PM

I was also at the UCR event. A report and video can be accessed here.

This was a typical academic exercise in indoctrination by the faculty at UCR. Barghouti's sponsors at UCR included two co-founders of the US Campaign for the Academic Boycott of Israel.