The following press release was issued by the American Studies Association Caucus on Academic and Community Activism on December 21 2013 and  published here.


It has come to our attention that members of the American Studies Association are getting hate mail or threatening mail following the ASA membership vote in favor of a resolution calling for boycott of Israeli universities. The ASA Facebook page has been subject to an avalanche of abusive postings for almost two weeks. In other cases, the intimidation has been less public as senior faculty have explicitly and implicitly intimidated junior faculty who support the boycott.  More generally within the academy, some are threatening to cut funds for faculty who want to attend the ASA in the future. We are also learning that individuals and groups outside the academy are threatening legal action against the ASA.

Expressions of hate and intimidation, even if they come from isolated individuals, constitute part of a larger pattern of attack on anyone who criticizes Israel or Zionism. These disturbing messages can take the form of threats. As such, they should not be dismissed or discarded.

If you are subject to a privately delivered expression of hate or intimidation in person, in emails or over the telephone, we recommend that you neither respond to, nor discard these messages. Instead, we suggest you document the incident (when, who, where, what format, content, etc) and report it to the ASA Academic and Community Caucus at asaactcaucus@gmail.com so that we can address the incident via legal channels, and in a way that is least burdensome to you.

Intimidation and frivolous legal arguments against boycott are part of a long-standing history of repression of Palestinian human rights activism in the United States. The ASA resolution for boycott is legal. Tactics of intimidation may be illegal.  We will try to address any academics and administrators who participate in undemocratic, unethical, and illegal behavior, and if necessary we will take legal action with the support of our legal team.

We are at a turning point when tactics of bullying and intimidation will no longer work to silence those of us who recognize the injustice of Israel’s treatment of Palestinians. There is a growing number of students, junior faculty, senior faculty, and prominent scholars advocating for Palestinian rights in the US, and we are working together, around the country and internationally, in the interest of addressing a social justice issue, one which has been endorsed by the majority of ASA members and the national leadership.

With the vote to boycott Israeli universities, ASA has embraced a legitimate means of addressing Israel’s human rights violations and challenging the US government’s unconditional support for Israel. As we move forward, threats and insults will not silence our voices or undermine the growing support for the academic boycott.

In response to these alleged "threats" and  "intimidation"  ASA members  have set up a blog,  BDS Love letters: Hate Mail to BDS Supporters  aimed at "tracking the (unsolicted) communications directed at supporters of the Israeli BDS movement"  and publishing what we can only assume are the worse of what they have received. You can count the postings on both hands.  Its not much of an avalanche. 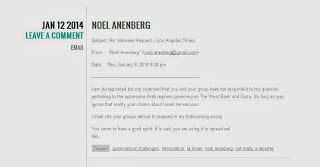 There are no actual threats published, and there  is nothing on their site that holds a candle to what Israeli students, and supporters of Israel have faced.