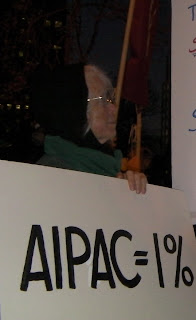 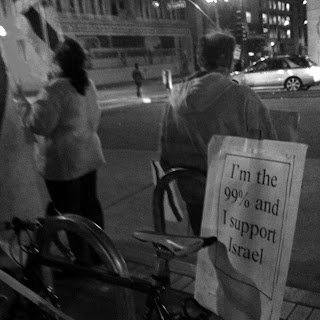 On Monday night, standing outside Oakland's Grand Marriott Hotel, holding a flag and a sign that said "The 99% Support Democracy, The 99% Support Israel", I had some time to consider the usefulness (or lack therof) of this whole 99% and 1% business, as it applied to the business at hand.

The organizers of the event, Students for Justice in Palestine, Code Pink, Jewish Voice for Peace, and company, were running with the idea that AIPAC is the 1%--the quintessential 1%--and called their event 'Occupy AIPAC, Not Palestine'. (The complex means by which 'occupy' is now being used by these people both as a positive and negative term--and the total lack of actual 'occupation' in any of these contexts--is a story for another time.)

AIPAC is not the 1%. AIPAC's membership is made up overwhelmingly of economically average Americans. AIPAC is a lobbying group, and entirely uninvolved with the banking industry, or the current economic morass in which the United States finds itself.

One of our members was told directly, twice, on Monday night, that she 'was the 1%'. This was patently not true; she is, in fact, a kindergarten teacher at a public school, which is not traditionally a profession of the rich and influential. But in the minds of the anti-AIPAC protesters, she had given up her place in the economic rank-and-file of the country by daring to cross them over Israel.

Meanwhile, San Francisco Voice for Israel held signs proudly proclaiming ourselves lovers of Israel who are the 99%, and claimed the support of the 99% for democracy, and for peace in the Middle East. The mere idea that we would do this seemed to confuse some who were unable to grasp the idea that they did not own the Occupy movement. Allison Deger at Mondoweiss was baffled:  "(In an odd occurrence, while members of the Occupy Oakland movement were present at the Stop AIPAC demonstration, members of the pro-AIPCA demonstration carried sign identifying as the "99%")." Note: There were members of the Occupy Oakland movement present on both sides. That this is unthinkable to people who like to imagine that all left-wing activists agree with them does not make it any the less true.

But to get back to this 1% business--to call someone "the 1%" is essentially to say that they are rich and powerful, which is a fairly loaded thing to falsely throw at Jews. After the demo, several people commented that they had perceived the emphasis on AIPAC as 'the 1%' as containing rather obvious layers of racist nuance. "Essentially they mean Jews are the 1% who run the world," a friend commented.

This shouldn't surprise anyone, but it should be of some concern to those anti-AIPAC protesters marching blithely around with signs declaring that AIPAC violates their Jewish values. These people should understand that they are being offered a bargain that's all too familiar to Jewish activists: they are permitted to consider themselves part of the struggle, as long as they ask for nothing for themselves, and never critique the ways in which anti-Semitism is used in that struggle.

It's a bad bargain. Regardless of feelings about AIPAC, no Jew should accept it.
Posted by Makabit at 12:26 PM

Attending on the side of darkness were Rae Abileah, Flotidiots Paul Larudee and Janet Kobren, Hassan Fouda- Egyptian anti-Israel activist who carried a Jews against occupation sign- Andrew and Marina Guiterrez, Noura Khouri, fresh back from trouble-making in Egypt, Leslie Angeline, anarchist Jean Pauline looking pert and lively at 90, along with her best beloved Tom Browne. Who else was there?

"We felt it was important to come together to protest AIPAC, because we are opposed to the lobby for war and occupation, to be present in our community. AIPAC represents the 1%, and spends $60 million dollars a year to pressure politicians to hand over $3 billion US tax dollars annually, to send to Israel to occupy and oppress Palestinians and attack non violent protesters in Oakland!

wow. 60 mil? not anywhere near even the top 20 in lobbying firms.

and way to attempt to connect ows with israel....musta missed when the idf came in to stomp down on the oakland and sf ows

the woman is a jew hating loon

Noura Khouri atacked one of the Jewish activists with her flag, mounted on a heavy wooden pole. Then she did it again. And again. The police wouldnt do a thing.

Its my understanding he took the matters into his own hands, quite literally, snapping her weapon in half and presenting the pieces to the officer in charge.

And again, the police refused to take action.

If you look at it realistically- over 5,000 people attended the AIPAC dinners, held in 4 different bay area cities in celebration the relationship between these two democracies. Less than 50 people protested . Its pretty obvious who the 99% is, and who's in the minority

The part of the story you missed Noura Khouri (Jew-hating loon -does anyone know if is she still with the American Friends service Committee? ) targeted the elderly zionist because he was a kippa-wearing observant Jew. This was not the first time observant Jews on the pro-Israel side were targeted, with hate crimes.