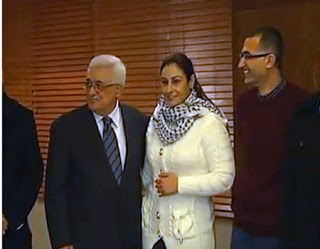 So, Israel has objected to Mahmoud Abbas meeting with Amna Muna. This woman was released this week, as part of the exchange of prisoners for Gilad Shalit. She had been serving a life sentence for luring a sixteen-year-old boy named Ofir Rahum to meet her in Jerusalem, with a fake Internet identity and promises of romance. She took him to Ramallah, where he was murdered by her co-conspirators.

And now she's out, to be greeted by a warm reception from Abbas. Israelis are, understandably, a little agitated at yet another reminder that people who've committed horrific crimes against civilians are, in fact, considered heroes and freedom fighters by Palestinian leaders.

Palestinian leaders, meanwhile, feel that it's entirely unreasonable for Israelis to be upset about a little business of a continential breakfast or two between a president and a terrorist. Jibril Rajub, who the AP describes as a 'Palestinian official', but the liberal-left Ha'aretz more bluntly describes as a 'Fatah strongman', was quite iffy about the whole thing. "If she doesn't deserve to live, why did you let her go?" he demanded. "We can't he talk to her?" he went on, addressing Israel Radio. "There are Israeli parliamentarians and army generals who are worse than her."

That's the sort of insane, unaccountable logic that anti-Israel nuts on the Internet tend to favor. Warfare, terrorism, diplomacy...it's all the same thing, more or less, right? There are members of the Knesset who are just as bad as this woman who lured a sixteen-year-old civilian to his death in cold blood, and we know this because...well, because Mr. Rajub says so, and he ought to know.

A Facebook friend provided a 'what-if' that I think casts some light on this whole situation: what if Netanyahu had sat down with some of the recent 'price tag' vandals, for coffee and a photo op? Bear in mind that as little as I approve of these people, they have done nothing that even begins to approach what Ms. Muna was convicted of. What if his excuse was the same as Abbas', that he should 'be with his people', wherever they were? What would the people say who are going to look at this and shrug, because it's not important, and there are people worse than Amna Muna? I think we all know.

(Ha'aretz also notes that Muna was supposed to go to Gaza after her release, but refused, because she's a secular Muslim. There's a sort of sad fitness to learning that even terrorists don't want to set foot in what Fortress Hamas has become. Amna Muna may be evil, but she's apparently not stupid.)
Posted by Makabit at 7:22 PM