From an Article by Omri Ceren in Commentary

The International Solidarity Movement is one of those quirky peace-loving pro-Palestinian groups that also happens to support and provide succor to anti-Jewish mass murderers. The organization – which of course gets shady NGO funding – served as a cover for the UK terrorists who infiltrated Tel Aviv and committed mass murder at Mike’s Place. It attempted to assist Palestinian terrorists who hid in the Church of the Nativity. Its members help organize and proudly participate in efforts to break Israel’s blockade of the Hamas-controlled Gaza Strip.

None of that is an accident. In 2002 the group’s founders, Adam Shapiro and Huwaida Arraf, advocated “Palestinian resistance… both non-violent and violent.” They tsk tsk’d that “people will get killed and injured” but reassured their audience that at least the injured Palestinians “would be considered shaheed,” a word not coincidentally used in other contexts to celebrate suicide bombers. Arraf took pains two months ago to point out that she hasn’t changed her mind, and that she and the ISM “recognize the Palestinian right to use armed struggle.”

The International Solidarity Movement is appealing for activists to join our team in the besieged Gaza Strip. After being barred from Gaza in 2003 following the murders of Rachel Corrie and Tom Hurndall, ISM Gaza was reinstated in August 2008 when ISM and other volunteers traveled aboard the historic, siege-breaking voyage of the first Free Gaza Movement boat… ISM volunteers refused to leave when Israel began bombing Gaza in December 2008. During the devastating 23-day assault, activists accompanied ambulances and provided vital testimony to the international media.

That’s a strange boast to make, since you wouldn’t think that international media outlets would agree to turn the propaganda of pro-violence activists into news. Maybe the ISM is just mistaken.

There have also been reports in the past that ISM members have dressed as Jews in an effort to implicate "settlers" in atrocities against the Palestinians. 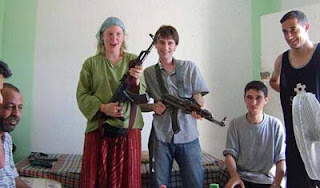 Note to volunteers: No one will believe you advocate non-violence if you are training with AK-47's
Posted by Dusty at 8:12 PM