Everyone is talking about Newt's comments. And those that arent talking about it are emailing. Thanks to everyone who send me this: 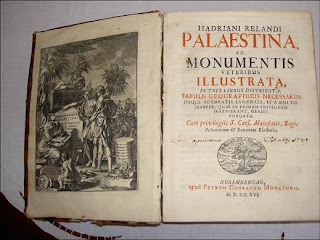 This appears to have orginiated with Avi Goldreich, and was posted on the Think Israel website

" The book was written in Latin. In 1695 he was sent on a sightseeing tour to Israel, at that time known as Palestina. In his travels he surveyed approximately 2500 places where people lived that were mentioned in the bible or Mishnah. His research method was interesting.

He first mapped the Land of Israel.
Secondly, Relandi identifies each of the places mentioned in the Mishnah or Talmud along with their original source. If the source was Jewish, he listed it together with the appropriate sentence in the Holy Scriptures. If the source was Roman or Greek he presented the connection in Greek or Latin.

Thirdly, he also arranged a population survey and census of each community.

His most prominent conclusions
1. Not one settlement in the Land of Israel has a name that is of Arabic origin. Most of the settlement names originate in the Hebrew, Greek, Latin or Roman languages. In fact, till today, except to Ramlah, not one Arabic settlement has an original Arabic name. Till today, most of the settlements names are of Hebrew or Greek origin, the names distorted to senseless Arabic names. There is no meaning in Arabic to names such as Acco (Acre), Haifa, Jaffa, Nablus, Gaza, or Jenin and towns named Ramallah, El Halil and El-Kuds (Jerusalem) lack historical roots or Arabic philology. In 1696, the year Relandi toured the land, Ramallah, for instance, was called Bet'allah (From the Hebrew name Beit El) and Hebron was called Hebron (Hevron) and the Arabs called Mearat HaMachpelah El Chalil, their name for the Forefather Abraham.

2. Most of the land was empty, desolate, and the inhabitants few in number and mostly concentrate in the towns Jerusalem, Acco, Tzfat, Jaffa, Tiberius and Gaza. Most of the inhabitants were Jews and the rest Christians. There were few Muslims, mostly nomad Bedouins. Nablus, known as Shchem, was exceptional, where approximately 120 people, members of the Muslim Natsha family and approximately 70 Shomronites, lived.

The interesting part was that Relandi mentioned the Muslims as nomad Bedouins who arrived in the area as construction and agriculture labor reinforcement, seasonal workers.

In Gaza for example, lived approximately 550 people, fifty percent Jews and the rest mostly Christians. The Jews grew and worked in their flourishing vineyards, olive tree orchards and wheat fields (remember Gush Katif?) and the Christians worked in commerce and transportation of produce and goods. Tiberius and Tzfat were mostly Jewish and except of mentioning fishermen fishing in Lake Kinneret -- the Lake of Galilee -- a traditional Tiberius occupation, there is no mention of their occupations. A town like Um el-Phahem was a village where ten families, approximately fifty people in total, all Christian, lived and there was also a small Maronite church in the village (The Shehadah family).

3. The book totally contradicts any post-modern theory claiming a "Palestinian heritage," or Palestinian nation. The book strengthens the connection, relevance, pertinence, kinship of the Land of Israel to the Jews and the absolute lack of belonging to the Arabs, who robbed the Latin name Palestina and took it as their own.

Read Latin? This book is widely available in academic and theological libraries. Locally, its at the Graduate Theological Union Library in Berkeley. Room use only. Want one of your very own? Its available for sale, for a bit over $675- plus the costs of postage and handling from a bookseller in The Hague, Netherlands
Posted by Dusty at 3:48 PM

Email ThisBlogThis!Share to TwitterShare to FacebookShare to Pinterest
Labels: American Muslims for Palestine, ancient history of the Holy land, Relandi