Hows that "secular democractic state" going for you, btw?

So, How's that "secular democratic state in Palestine " working out for you?

From the MAAN News Agency


AZA CITY (Ma'an) Police shut down the Gaza branch of a social media conference on Sunday, days after another video conference was closed by authorities in the coastal strip.

Billed as the first Palestinian social media conference, the three-day event opened Sunday in Ramallah's Cultural Palace with a video link to the Light House Hotel in Gaza City.

Abu Sharkh said in a press statement that the group had sent a formal letter to authorities notifying them of the conference.

"They told us there was no problem," he said.

When police arrived, the organizers complained to Gaza's media ministry who tried to intervene, but without success, Abu Sharkh said.

They were informed the conference could proceed as soon as the necessary licenses were obtained, he added.

PCHR said the event coordinator had notified police of the event two days prior and called on the government and security services to stop interfering in private meetings.

The law on prior police notification applies only to meetings of more than 50 people in an open place, and thus not to Musawa's event, PCHR said at the time.

The rights group said closing down the conference "constitutes a violation of the right to freedom of opinion and expression and the right to peaceful assembly which are ensured under the constitution." 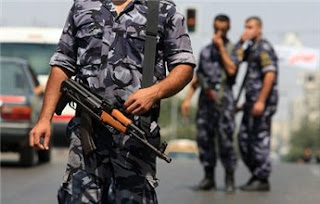 Email ThisBlogThis!Share to TwitterShare to FacebookShare to Pinterest
Labels: attacks on Israel from Hamas, Gaza, secular democratic state in Palestine