86 Wells Approved for W. Bank but PA has failed to drill 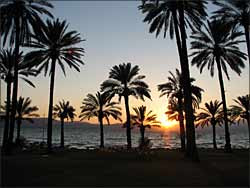 Photo: Palm Trees by the Sea of Galilee

NOTE TO READER: In the long list of "crimes" the State of Israel is accused of, "stealing" water is always on the list. The last time I investigated the merits of the claim, I found that the major aquafirs that Israel taps into reside on Israeli territory. If anything, unchecked Palestinian building sans permits or appropriate sewage planning have caused something of an environmental problem which affects the water supply. This appeared in the Jerusalem Post on August 5, 2009. --- Becky Johnson -- One Woman Talking
Sept 12 2009

Palestinian claims that Israel denies water rights in the West Bank are "baseless and incorrect," Lt.-Col. Amnon Cohen, head of the civil administration's infrastructures department, said Tuesday. He said that in 2007 the Palestinians received 47 million cubic meters of water and in 2008 over 52 million. In addition, Israel recently allocated land on the beach next to Hadera for a Palestinian water desalination plant, which could provide over 100 million cubic meters of water annually. "The land was allocated over a year ago and the Palestinians have yet to move forward with the project," he said. "The Palestinians do not cooperate to try and independently improve their water situation," Cohen added. "While we in Israel are cutting back on water use due to the drought and imposing fines on people who use too much water, the Palestinians are doing nothing of the kind."

The Palestinians claimed that while the Israeli-PA joint water committee approved the drilling of 82 wells, none have been carried out due to Israeli refusal. "This is nonsense," Cohen explained. "Out of the 82, 43 are in Areas A and B which are under PA control and they do not need us involved. Out of the remaining 39, in Area C and under Israeli security control, 21 have been approved and 11 have not even been submitted for approval." Dozens of drillings have been approved over the years but the Palestinians have not acted upon them. There are already 11 open wells in the territories that have not been connected to pumps. "If they were to connect the wells, they would get another 11 million cubic meters of water," he said. (Jerusalem Post)

Article can be read in its entirety here.
Posted by Becky Johnson at 2:21 PM