The clueless of anti-Israel agitators is a remarkable thing to behold.

In an article published in Middle East Monitor, Paul Larudee of the Free Palestine Movement displays not only an unusual denseness but a casual willingness to ignore reality. For its part, the Middle East Monitor invested no effort in fact-checking or verifying Paul's testimony


According to Dr Paul Larudee, a co-founder of the Free Palestine movement, thousands of activists waving Palestinian flags turned out to blockade the Israeli cargo ship Ever Lasting, which pulled into a harbour in the San Francisco Bay on Saturday morning.

The protesters intended to form a picket line to prevent work crews from unloading the ship, responding to the Palestinian General Federation Trade Union's BDS call for workers around the world to refuse to handle Israeli goods. "The Ever Lasting and its sister ship ZIM Piraeus were both due to be unloaded that day," Dr Larudee told MEMO.

"As it approached the docks, however, the Ever Lasting was ordered by the port authority to return to the entrance and moor to the side until further notice. In the meantime, the ZIM Piraeus had been treading water off the coast of Monterey since the previous evening."


In reality, the EverLasting is not an "Israeli cargo ship"  It's Hong Kong flagged and owned by a Chinese company. It does not even doesn't sail to Israel. Its not a "sister ship" to the Piraeus. Its not even a distant cousin.


The Ever Lasting sailed into Oakland harbor early Saturday morning. 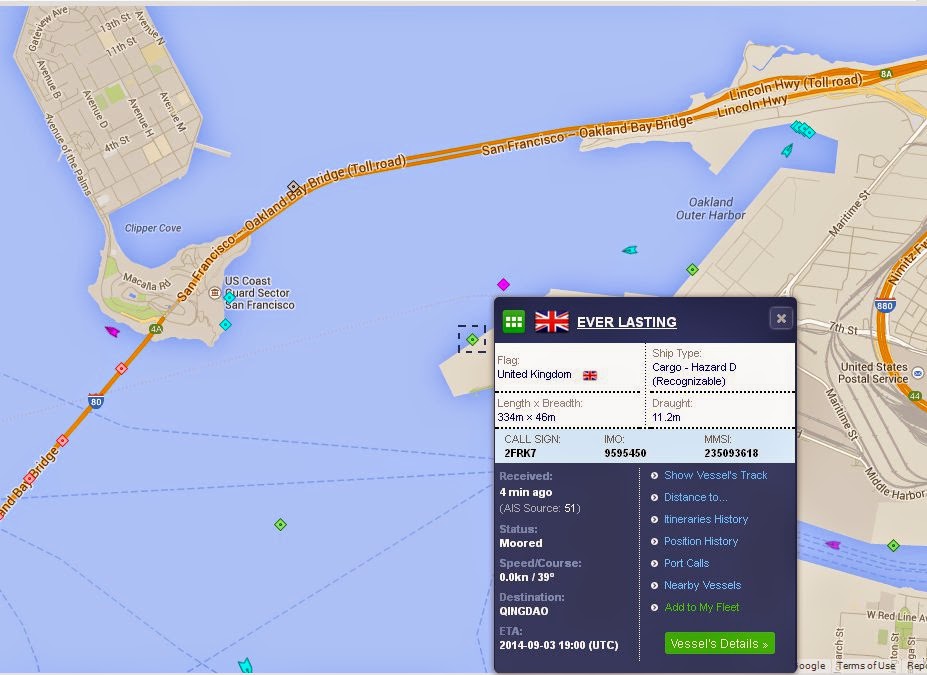 and was unloaded without incident. There was not a single protester on the docks. The protest call , originally issued for 5 am, had been changed to 3pm.

No, Paul. The 500 protesters that showed up at the Oakland docks late in the afternoon  at had no effect whatsoever on the docking or unloading of the Ever Lasting.

According to John Driscoll, of the Port of Oakland

"Seaport operations were not impacted by the protest.  Operations scheduled for tonight and tomorrow are currently expected to proceed as planned."

And yes, Paul, he's a more trustworthy source than you. Paul Larudee's block the boat: It is a tale told by an idiot, full of sound and fury, signifying nothing.

they managed to block the Piraeus from being unloaded on Sunday, and the union dockworkers didn't cross the picket line.

It occurs to me, pro-Israel people in the Bay Area can be proactive by boycotting the Port of Oakland and encouraging others to boycott it and other ports that allow anti-Semitic blockades.

For instance, Oakland International Airport is part of the Port of Oakland. What would happen if every pro-Israel person taking a plane to or from the Bay Area boycotted Oakland Airport? SFO is of course no better WRT politics, but local boycotts would at least send a message that anti-Semitic actions will cause financial loss. It could only be a symbolic one day, not permanent boycott.

This is actually a statement about how many news channels just repeat rumors without fact-checking.