In 2010, anti-Israel activists at the Port of  Oakland  sought to block a Zim cargo ship from docking. They issued press-releases declaring victory well before the targeted Zim ship had even steamed through the Golden Gate. Mainstream media was complicit in spreading their lies.

Its deja vu all over again.

The same activists, spearheaded by the extremist Arab Resource and Organizing center planned a similar action for this weekend, organizing largely via social media.  Originally calling for  activists to meet at the West Oakland BART station at 5 am, they inexplicably changed direction, re-issuing a call for action at 3pm.

There is some speculation that they knew they would be unable to achieve critical mass at 5am, while most of the local anarchists were still sleeping off their beer hang-overs, and that was the primary reason for the change.

From Jane Jewell, of  the Marin county group 14 friends of Palestine

But there is also some speculation that the organizers were made aware that they were targeting the wrong ship.  Although it appears on the Zim website, the EverLasting is not a  Zim vessel. It was a fools choice for the Block the Boat organizers: Do they block the wrong boat, or do they block a boat that hasn't arrived yet?

Via twitter:
The Everlasting was off-loaded without incident, and the Piraeus became the focus of the action. 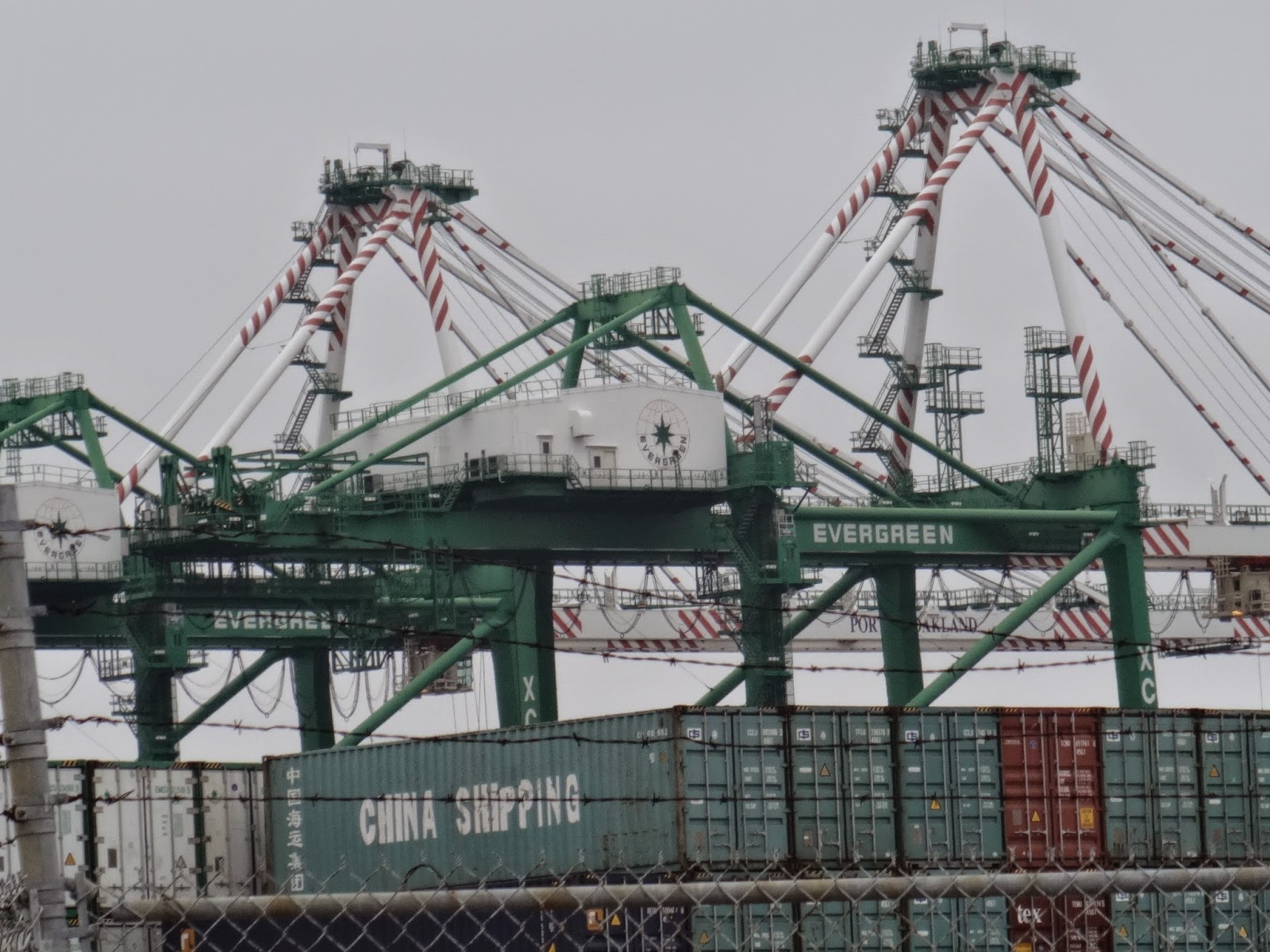 At 3, several hundred gathered at the West Oakland Bart station, and began the march to the docks. It was a typical Bay Area "peace" rally. 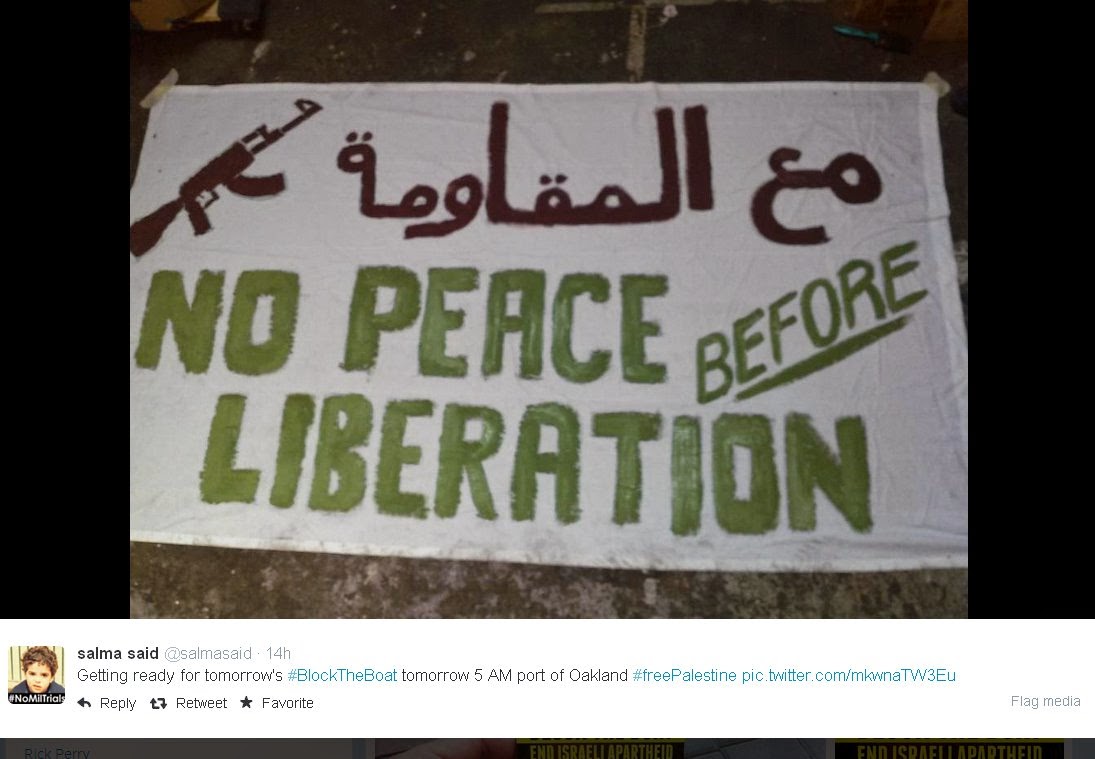 And as usual in the Bay area, not a single of the sponsoring "human rights" groups said a word about this glorification of violence . And as usual, although the protesters were happy to declare "victory", there was no real effect on port functions.

The flag of the terror group Hamas was proudly displayed.

No one would ever mistake the Block the boat activists for patriots, as they joked about burning American flags

From John Driscoll, of the Port of Oakland


At about 4:30 pm today, approximately 500 protesters entered the Port's maritime area (seaport) and demonstrated along Middle Harbor Road, near the Oakland International Container Terminal.  The protest was related to the Gaza-Israel conflict in the Middle East.

As of 5:30 pm, the protesters were leaving the seaport.  As a cautionary measure, law enforcement is maintaining a presence on-site.  Seaport operations were not impacted by the protest.  Operations scheduled for tonight and tomorrow are currently expected to proceed as planned.

Wishing the haters of peaceful co-existence many more such victories.

The protesters did accomplish one thing from this utterly pointless maneuver.  A fundraiser for "The Vagina Monologues."  scheduled for the waterfront was cancelled and forced to relocate. The organizers scrambled to find a last minute venue to relocate their event 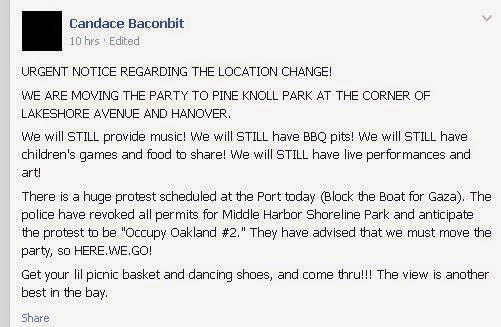 The Block the boat action has done more than hurt the reputation of the Port of Oakland as a stable hub for U.S. shipping.  The block the boat activists have proven themselves to be bad neighbors all around.  I'm certain no one is surprised.

UPDATE: In spite anti-Israel activists claims to the contrary,  the Longshore and Shipping News reported  Thirty ILWU members worked the ship, starting at 10 PM Tuesday and completing the work at 4 AM Wednesday.
Posted by Dusty at 6:48 PM

This wasn't mentioned at all on SFGate. I searched on the story and found this blog. Why didn't SFGate cover the story?

There is an anti-Israel rally every week. Its just not news any more. That would be my guess.

These protesters in Oakland are America's Hitler Youth so it's good to see them fail. Now the news needs to follow up and report their failure. #BDSFAIL

Maria Lourdes Nocedal, who teaches fourth grade in San Francisco, said she plans to educate her students about what is going on in Gaza.

"Innocent people are dying," she said. "The empathy movement is starting now."

If I were a parent of a child in this woman's classroom, I would be very afraid. Imagine proudly announcing your intention to indoctrinate and propagandizing 4th graders in America? How frightening.

The Israeli ZIM cargo ship did dock at the Port of Oakland, but the workers refused to unload the cargo Sunday in solidarity with the smaller number of protesters picketing at berth 57. The delay will probably cost the ZIM shipping company thousands of dollars.

you are all a bunch of trolls

To Anonymouse at 4:09 am- Just wondering- How does one "troll" their own blog?

The irony was the Piraeus was carrying Turkish goods. Yes. That's right. Hamas supporters hurt their Muslim brothers in Turkey