Anti-Israel activism on campus is not a grass-roots localized effort- rather it is carefully coordinated and organized by professional activists.  We saw this earlier this year when Max Samarov  exposed career activist Dalit Baum as the author of a campus BDS resolution at Loyola University


On Tuesday, April 1st, Students for Justice in Palestine presented the Loyola student government with an anti-Israel divestment resolution. But what they neglected to mention was that they didn’t write the legislation themselves. It turned out that the real author was Dalit Baum, a major leader in the global Boycott, Divestment, and Sanctions (BDS) campaign against Israel. Baum is not a student or faculty member of Loyola or any North American university. She is a paid operative working to co-opt student governments into following the BDS Movement’s malicious, anti-Israel agenda. And if she is writing resolutions for one school, it is likely that she is writing them for others as well.
We are seeing it again.  University lecturer Hatem Bazian, who once infamously called for an “Intifada” in America has begun promoting an anti- Israel agenda for the coming school year.  A professional agitator,  not a student representatives is again setting the agenda, and has declared an  “International Day of Action” against Israel on Sept. 23, 2014. 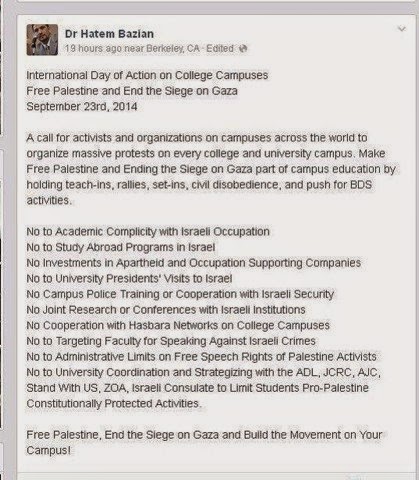 University of California at Berkeley professor and founder of the national student group “Students for Justice in Palestine” (SJP) Hatem Bazian announced an “International Day of Action” to call for a complete academic and cultural boycott of Israel on September 23rd- the Eve before the Jewish New Year.


The anti-Semitic nature of the day included calls for “No joint research or conferences with Israeli Institutions, No to University Presidents' Visits to Israel, No Campus Police Training or Cooperation with Israeli Security” in addition to demanding the elimination of all study abroad programs in Israel. The effort is to prevent all academic interaction with the Jewish state and to limit people’s ability to interact with Israel and Israelis.


The attempt to isolate Israel extends to a boycott of Jewish and Israeli on-campus organizations as well. Professor Bazian has also commanded his group to demand “No to University Coordination and Strategizing with the ADL, JCRC, AJC, Stand With US, ZOA, Israeli Consulate to Limit Students Pro-Palestine Constitutionally Protected Activities.”
Lets hope our students are prepared for this latest round of anti-Israel activity
Posted by Dusty at 11:07 AM

And tis clown has the effrontery to complain about Islamophobia.

Even by Berkeley standards, this guy is an embarrassment.