The Ethnic Cleansing of the Hebron Jews

Aug 24 is the anniversary of the infamous Hebron massacre, marking the ethnic cleansing of the Jewish population from Hebron, the second holiest city in Judaism. For those who claim "its all about the Occupation", read on;

From the wonderful blog Israel's History. A Picture a day

Background to the Hebron massacre. After the British army captured Palestine from the Turks in late 1917, the relationship between the British and the local Arab population was characterized by tension that sporadically erupted into insurrection over the next 30 years.

The Arabs of Palestine were led by the powerful Husseini clan who controlled the offices of the Mufti (religious leader) as well as the Mayor of Jerusalem. For decades the clan had opposed European colonialism, the growing power of foreign consulates in Jerusalem, Christian and Jewish immigration and land purchases. After the 1917 Balfour Declaration expressed support for “a national home for the Jewish people,” Husseini added “Zionists” to his enemies list. The clan leveraged its power and threats of violence to win over Turkish and British overlords, to challenge the Hashemite King Abdullah, and to hold off competing clans such as the Nashashibi, Abu Ghosh, and Khalidi clans.

On Yom Kippur 1928, Jews brought chairs and screens to prayers at the Western Wall. This purported change of the status quo was exploited by the Mufti, Haj Amin el Husseini, to launch a jihad against the Jews. Husseini’s campaign continued and escalated after a Jewish demonstration at the Kotel on Tisha B’Av in August 1929. Rumors spread that Jews had attacked Jerusalem mosques and massacred Muslims. The fuse was lit for a major explosion.

﻿Starting on Friday, August 23, 1929 and lasting for a week, attacks by enraged Arab mobs were launched against Jews in the Old City in Jerusalem, in Jerusalem suburbs Sanhedria, Motza, Bayit Vegan, Ramat Rachel, in outlying Jewish communities, and in the Galilee town of Tzfat. Small Jewish communities in Gaza, Ramla, Jenin, and Nablus had to be abandoned.

The attack in Hebron became a frenzied pogrom with the Arab mob stabbing, axing, decapitating and disemboweling 67 men, women and children. At least 133 Jews were killed across Palestine. In 1931, there was a short-lived attempt to reestablish the Jewish community in Hebron, but within a few years it was abandoned until the Israel Defense Forces recaptured Hebron in 1967.

The British indulged the Arabs and responded by limiting Jewish immigration and land purchases. 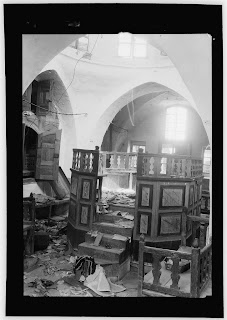 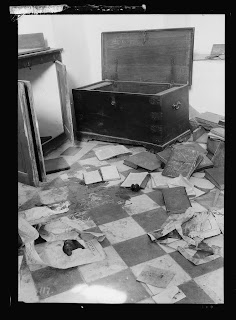 And what do the Palestinians have to say about the Hebron massacre? From MEMRI 92-Year-Old Palestinian Woman: Palestinians Should Massacre Jews Like We Massacred Them in Hebron

Interviewer: What is your name?

Interviewer: How old are you?

Interviewer: What does this day mean to you? You have lived 63 years since the Nakba. You have experienced the entire Nakba...

And the lesson is, as always: Never Again.
Posted by Dusty at 4:41 PM