Thanks everyone for the reminders. I'm having a hard time keeping up with the latest BDS fails, but for this week, lets give top billing to the ever noble actor Sir Patrick Stewart, (Captain Picard to my fellow Trekkies) currently in Israel filming a comedy with Israeli director Reshef Levi. He will play an eccentric British lord who teams up with Israeli misfits to help a boy save his family's home.

Also annunced this week, rocker Lenny Kravitz will be traveling to Israel in October and has scheduled a concert in Tel Aviv's Nokia Arena on October 6. Kravitz has sold more than 35 million albums since 1989. His latest album Black and White America came out in 2011.

This is really exciting for me. It’s monumental,” Kravitz said Wednesday in an interview with Israeli reporters ahead of his first trip to the Holy Land.

He also said had no doubts about making the trip, and since his arrival will mark the last of a leg of his tour, he plans to “hang out a bit” in the country after the concert.

The musician, famous for hits including “American Woman,” “Fly Away,” and “Are you gonna go my way?”, has never been to Israel, despite his father’s Jewish heritage. Though his mother is not Jewish, Kravitz’s father is from a Jewish family of Ukrainian decent. Kravitz said he “grew up right in the middle.”

The time spent in Israel will hopefully be a welcome change for Kravitz, who said he spends half the year in Paris and half in a trailer on a beach in the Bahamas.

UPDATE. This just in via Charismatic Megafauna: 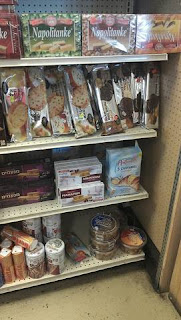 Sighted in a farm stand on the edge of a wildlife preserve in the middle of nowhere, Yolo county- a full line of Osem cakes from Israel. Quick, someone hike out there and reminder the proprietor that BDS is on a roll. Apparently the shop specializes in gourmet international groceries, and local produce. BDS fail.


UPDATE. Aw! Lenny Kravitz has cancelled his date in Israel, along with his appearances in in Kiev, Bucharest, Zagreb and Istanbul, to shot a movie, according to the J post Wanna bet the BDS'er s will claim victory?
Posted by Dusty at 10:05 PM

whoops i didn't see the Patrick Stewart mention in this posting initially. it's nice to see all these recent examples of BDS fails. i would ask all of the so called progressives and humanitarians out there to turn maybe just 2% of their attention north of Israel where there there is actually mass killings and brutality going on at the hands of the assad regime. but i know human rights issues that would distract these people from their obsession with Israel have never been high on their list of priorities. but considering the failure of the BDS agenda it's no wonder these degenerates have resorted to demonizing Israel on the internet and vandalizing Trader Joes stores as well as public advertising. well obviously, outside of their little cult no one is listening to them.