"As a Jew" cru planning a protest of Wiesenthal Center fundraiser

Oh that daffy "As A Jew" cru. Are they really planning a protest of the Wiesenthal's Center showing of "It Is No Dream: The Life of Theodore Herzl" at Laemmle Music Hall in Beverly Hills tomorrw evening?

Apparently they are, according to a recent email by Rick Chertoff, Estee Chandler, and Jeff Warner

They are planning to protest a movie they haven't seen because (yep, this is an actual real life quote from the Jew-washers of LA) "Movie is sponsored by the Simon Wiesenthal Center, so it surely will contain material that we must counter."

This is their leaflet, incidentally. It contains the repeatedly discredited 4 part map (though this time they've decided to include Jerusalem's status as an International city in the partition plan map) 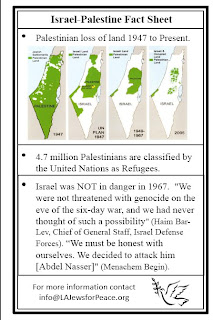 Regarding their claim that Israel was not in danger in 1967, let us remind the "As a Jew" cru of the words of the Arab leaders, as they prepared for war against tiny Israel in 1967.

President Abdur Rahman Aref of Iraq: “The existence of Israel is an error which must be rectified. This is our opportunity to wipe out the ignominy which has been with us since 1948. Our goal is clear—to wipe Israel off the map.”

Egyptian President Gamal Nasser: “Our basic objective will be the destruction of Israel."

Syrian Defense Minister Hafez Assad: "Our forces are now entirely ready not only to repulse the aggression, but to initiate the act of liberation itself, and to explode the Zionist presence in the Arab homeland. The Syrian army, with its finger on the trigger, is united. . . . I, as a military man, believe that the time has come to enter into a battle of annihilation. "

Fortunately, the Israeli political leaders of the time had learned that actions often follow words, and took the threats seriously.

Protesting a movie they haven't even seen? I wish I could say this was a new low, but JVP members don't seem to have any limits to the depths to which they will sink.
Posted by Dusty at 10:32 PM