Poor ignored JVP must be feeling particularly self-righteous now. The "As a Jew" cru at Jewish Voice for Peace found themselves ignored at the door of the Boston headquarters of Mitt Romney when they attempted to deliver a petition, critical of Romney.

From the JVP email promoting their petition:

Romney declared that "cultural differences" were the reason the Palestinian economy is not doing as well as Israel's, without even acknowledging the Occupation.

Perhaps (gasp) JVP has a point, and the role of the "occupation" should be acknowledged.

What was life like for the Palestinians under Israel's "occupation"? From Efraim Karsh:

The larger part, still untold in all its detail, is of the astounding social and economic progress made by the Palestinian Arabs under Israeli "oppression." At the inception of the occupation, conditions in the territories were quite dire. Life expectancy was low; malnutrition, infectious diseases, and child mortality were rife; and the level of education was very poor. Prior to the 1967 war, fewer than 60 percent of all male adults had been employed, with unemployment among refugees running as high as 83 percent. Within a brief period after the war, Israeli occupation had led to dramatic improvements in general well-being, placing the population of the territories ahead of most of their Arab neighbors.
In the economic sphere, most of this progress was the result of access to the far larger and more advanced Israeli economy: the number of Palestinians working in Israel rose from zero in 1967 to 66,000 in 1975 and 109,000 by 1986, accounting for 35 percent of the employed population of the West Bank and 45 percent in Gaza. Close to 2,000 industrial plants, employing almost half of the work force, were established in the territories under Israeli rule.

During the 1970's, the West Bank and Gaza constituted the fourth fastest-growing economy in the world -- ahead of such "wonders" as Singapore, Hong Kong, and Korea, and substantially ahead of Israel itself. Although GNP per capita grew somewhat more slowly, the rate was still high by international standards, with per-capita GNP expanding tenfold between 1968 and 1991 from $165 to $1,715 (compared with Jordan's $1,050, Egypt's $600, Turkey's $1,630, and Tunisia's $1,440). By 1999, Palestinian per-capita income was nearly double Syria's, more than four times Yemen's, and 10 percent higher than Jordan's (one of the better off Arab states). Only the oil-rich Gulf states and Lebanon were more affluent.

But JVP, the near miraculous economic growth of the territories is only part of the story. Efraim Karsh continues (please read the full article here)

Finally, and perhaps most strikingly, during the two decades preceding the intifada of the late 1980's, the number of schoolchildren in the territories grew by 102 percent, and the number of classes by 99 percent, though the population itself had grown by only 28 percent. Even more dramatic was the progress in higher education. At the time of the Israeli occupation of Gaza and the West Bank, not a single university existed in these territories. By the early 1990's, there were seven such institutions, boasting some 16,500 students. Illiteracy rates dropped to 14 percent of adults over age 15, compared with 69 percent in Morocco, 61 percent in Egypt, 45 percent in Tunisia, and 44 percent in Syria


Why did the Romney camp chose to ignore JVP? Maybe, just maybe, their reputation for providing cover for the worst anti-Semites in the neighborhood has finally caught up with them. 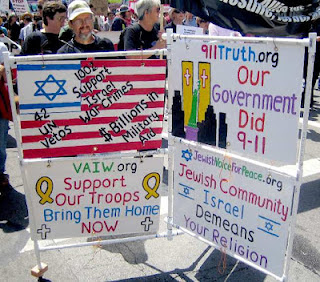 "Occupation" is simply a weak and long discredited straw man - the "activists" that JVP provides cover for are not willing to accept the existence of a Jewish state within any borders.
Posted by Dusty at 8:47 PM

of course it's largely a cultural issue. the social and political ills along with the lack of modernization of the palestinian people is endemic through out the entire arab world. just imagine if what wealth the arab world does have didn't come straight from the ground (with the help of Western tech.)?