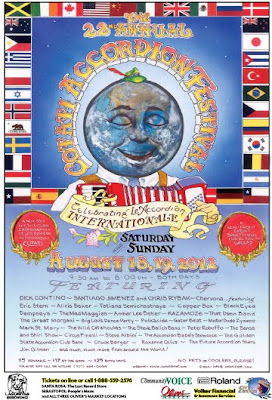 The 22nd annual Cotati Accordion Festival, a multi-cultural, multi-generational musical extravaganza has made a clear and unambiguous statement of support for Israel's right to exist.

Check out that Israeli flag in their current poster. Smooth.

Can there possibly be any greater indicator of the failure of the BDS movement? Could there be any clearer indication of the irrelevance of the BDS'ers than this?

Yes, the 700,000 tourists visiting Israel last month was pretty darn impressive. Lollapalooza choosing Tel Aviv for its 2013 music festival- not bad either. Cirque du Soliel adding extra performances in Israel certainly delivered a great big screw you to the BDS'ers. Madonna kicking off her tour in Israel was a significant failure as well.

But what could symbolize the feelings of heartland America more than the Cotati Accordion festival?

No need to answer- it was meant rhetorically.