More hate from the organizers of the Global march to Jerusalem

The colossal failure of the March 30 Global March to Jerusalem hasn’t stopped the propaganda or the plotting.


The Global March to Jerusalem joins the voices of concern in Jerusalem, Palestine and, indeed, the world over, about the latest as well as consequent threats to the al-Aqsa Masjid and the Dome of the Rock, as well as the Haram Sharif in Jerusalem and the policy of “Judaisation” that the Zionist leadership is pursuing with the explicit intent of removing Muslim, Christian, Arab and all other traces of non-Jewish history, culture, religion, archaeology and demography from the city of Jerusalem and all other areas under Zionist control

And launches itself into full anti-Semitic hate

These latest actions are part of the coordinated policy called “Judaisation” by the Zionist authorities. It includes the burning and defacing of Christian churches, the expulsion of Christian and Muslim Palestinians from the city of Jerusalem and from their homes throughout Palestine, the demolition of Palestinian homes, the confiscation of property, the denial of building permits, and many other forms of deliberate ethnic cleansing. This policy of Judaisation is in violation of the Fourth Geneva Convention (1949) on the rights of peoples living under occupation as well as dozens of resolutions of the United Nations censuring the Zionist state.

This is the part that stopped me in my tracks:

In addition, historic Palestinian archaeological treasures dating back up to two thousand years have been demolished and covered with new structures for the purpose of effacing most of the history of Palestine, which is predominantly Muslim and Christian Arab in culture and religion. The latest examples of this malicious policy are the ongoing construction of a Jewish “Museum of Tolerance” on the religious and historic Ma’manillah cemetery, which dates back to the 7th century and where the companions of the Prophet Mohammad and thousands of the righteous, officials, scholars, notables and Jerusalemite families have been buried, as well as the destruction of palaces from the Umayyad period near al-Aqsa in the Old City.

Oh, yes. This "religious and historic" Ma’manillah cemetery they mention? It was converted into a business center nearly 70 years ago, under the supervisor of the Supreme Muslim Council. A 4 story hotel, bank and factory were to be built on the land. The remains buried in the cemetery were transferred to a spot near the tomb of al Sayid al Kurashi. Its' "religious and historic" value didn't seem to be of interest to the Grand Mufti, who sold the property to the highest bidder.

"A member of the Supreme Muslim Council stated that the use of Moslem cemeteries in the public interest had many precedents both in Palestine and elsewhere. He quoted the case of the bab el Shira (Herrod's gate) cemetery which formerly stretched down St. Stephens gate and Jaffa cemetery which was converted into a commercial center and Queen Farida Square in Cairo which not long ago was a cemetery."

August 17 has been designated a "Hate on Israel day", with a "Stop the Judiasation of Jerusalem" theme by the usual suspects. Demonstrations are planned in NYC, Washington DC Boston, La, and elsewhere. There's plenty of time to plan a response. 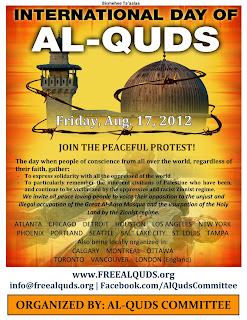