San Francisco Protest in front of the Israeli Consulate 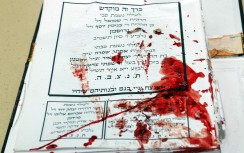 In 2008, 8  students were massacred  in the school library of Mercaz Harav, in Jerusalem. 15 were wounded.   Jewish websites were filled with photos of the blood-soaked library. The rest of the media was strangely silent.  The world, it seems, does not mourn dead Jews.

In a gesture near sociopathic in its scope, anti-Israel activists in the Bay area took to the streets to protest, lest anyone in the city pay attention to the dead Jews.  I recall them  standing in front of the Israeli consulate chanting  “Stop killing our children”.  Our hearts were broken over the lives lost, and still they taunted us.

They felt no compassion for the slaughtered children, who were, after all, only  Zionists.  Settlers.   Anything to strip them of their essential humanity.

That scene was repeated last Thursday at 6, again in front of the Israeli consulate. I watched, from a safe distance, while local extremist groups called for the destruction of  Israel. The usual chants of  “From the river to the sea”  were punctuated with  “we support the Intifada” and  "ba ruh, ba dam, nafdeek ya Filistin"  ("with our blood we will redeem you Palestine”).   In case their intent was unclear,  a new chant “We don’t want 2 states. We want 48”, referencing all of Israel,  pierced the air.  Activists standing by the “Jewish Voice for Peace” banner did not blink an eye.

In the last  few weeks in Israel, a  young Israeli boy, 13 was stabbed riding his bike. He is still fighting for his life. An elderly woman  was stabbed in the back.   A rabbi was hacked to death with a meat cleaver.   Ten Israelis are dead, over 175 injured in a cascade of violence spurred on by incitement at the highest levels.   And in San Francisco, again, anti-Israel activists took to the streets, lest anyone in the city pay attention to the dead Jews.

They stood with Hamas headbands. With shirts featuring the PFLP  terrorist Laila Khalid that stated  “My heroes have always killed colonizers”.

I soon realized that there was no such thing as  a “safe distance” with this crowd. Forrest Schmidt of International ANSWER came over repeatedly to harass me.  Cheryl Davila of the Berkeley Human Welfare Commission hissed “Bitch” at me.     When I  saw the young men furtively glancing at me as  they wrapped their kuffiyehs over their faces, I knew it was time to go.

A Pal-e-SWINIAN assassinated US Senator Robert F. Kennedy in 1968.

Tell the Schmidts and the other fascists that THEY are brutal occupiers of Native American land and should take their own demands to heart and LEAVE and return to Eurabia.

"Activists standing by the “Jewish Voice for Peace” banner did not blink an eye."

They're kapos, pure and simple! Shame on them!

next time don't go to their terror support demo. we'll just call in a surgical drone strike instead.