Rabbi Eitam Henkin and his wife Na'ama Henkin of Neria were murdered  by  terrorists who opened fire towards their vehicle as they were driving between Itamar and Elon Moreh.
Four of their children, ages 4, 7, and 9 and a four-month-old baby were in the car as it was attacked. 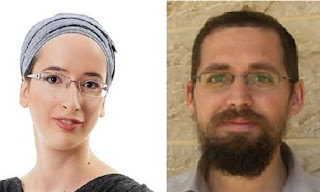 Hamas spokesperson Husam Badran referred to the murder of parents in front of their four children as a  "heroic operation."

As of now, not a single Palestinian leader, activist or public figure has publicly denounced the murder.
Posted by Dusty at 7:42 PM

I am just so angry and heartbroken, speechless

max blumenthal can join Saint Pancake and make a stack.