Another biased headline from the BBC

While we still mourn the murder of the Henkins, and grieve for their family, there has been another horrific attack on Israeli citizens.  Today  Nehemia Lavi, 41, and Aharon Benet, 22 were murdered in a terror attack in Jerusalem’s Old City.

Benet’s wife was in serious condition and their two-year-old baby was lightly wounded.

This is how the  incident was reported by the BBC.

There were complaints.  So the BBC tried again. 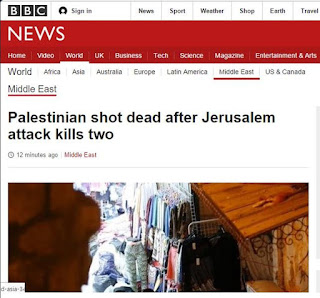 And finally a third time 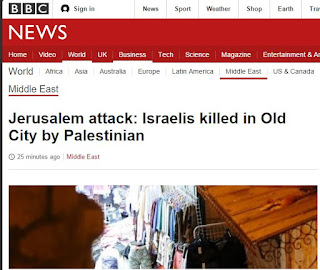 Thanks to those of you out there who attempt to keep the mainstream media honest
Posted by Dusty at 4:21 PM

PATHETIC! the BBC makes me sick they might as well be an official media branch of Pallywood.

And Fatah celebrates and calls the killer a hero.