In spite of a warning from the supervisory Health Housing and Human Services Office of the Director, Berkeley's Human Welfare Commission is continuing to plow ahead with their anti-Israel resolution

In a letter to the Commission, Acting Director of Health Housing and Human Services Kelly Wallace wrote:

The three take-home messages I hope to leave with you with are:
1) For any issue that you address as a commission there needs to be a clear nexus with the primary functions of the commission as articulated in the BMC;
2) The Commission must communicate with any other commissions, boards and/or departments that share partially or wholly the responsibilities for the issues being addressed; and
3) There will be increased expectations of the HWCAC in meeting your defined role as the Board of the Community Action Agency. 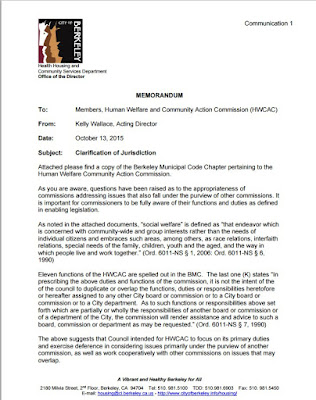 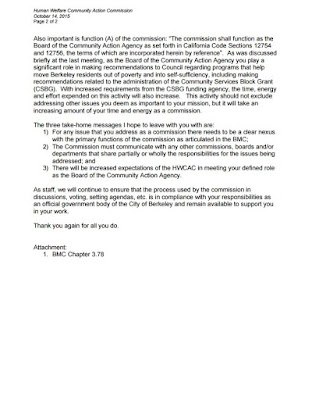 The clear nexus with the primary functions of the Commission?  It appears to be articulated in the only change to the referendum since the Sept 16 meeting.

WHEREAS, many members of the Berkeley community have immigrated or have roots in the conflict region and have a vested interest in its future;

and WHEREAS, the ongoing conflict is a source of ongoing discussion among different groups of citizens in our city....

People from the Middle East live here and talk about the conflict, and therefore it is within the purview of the Human Welfare Commission to pass over the needs of the Berkeley poor, and spend a year discussing a toothless foreign policy resolution.

The UN of Berkeley. Who'd have thought that?