The Celebrate Israel parade in New York City has been one of the highlights of the local Jewish community calendar for 51 years. 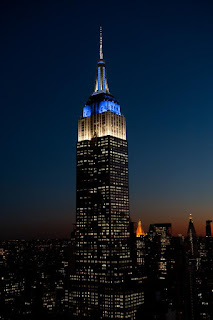 “Jewish” Voice for Peace and the International “ Jewish” Anti-Zionist Network go into hiding on this day. They can’t even pretend to speak for the Jewish community in the face of this very public and very joyous celebration.

But the Neturei karta- the self described “true Torah Jews” have been a fixture at this parade for the past several years.

This years participation of the “true Torah Jews” was truly special, as documented at Arutz Sheva.

In recent years, Neturei Karta activists have been accused of employing a "rent-a-crowd" - paying non-Jews, usually immigrants, to dress up as Orthodox Jews and pose with anti-Israel signs to make up for their own steadily dwindling numbers.

On the surface, yesterday's parade was no different, except that by many accounts the demonstration was somewhat smaller than usual.

But there was one thing: participants who looked a little closer noticed, much to their amusement, that Neturei Karta appeared to have gone cheap on their actors' costumes.

Several eye-witnesses, including members of Arutz Sheva's own delegation to the event, said that for a significant period of time the Neturei Karta protest consisted of just one actual Jew, who spent his time directing a crowd of poorly-disguised Hispanic and other non-Jewish actors wielding anti-Zionist and - oddly - homophobic signs at paraders.

The following pictures were submitted by Rabbi Elchanan Poupko, an Arutz Sheva reader who was present at the Sunday parade.

"As we came close to the Neturei Karta group and the other group protesting the Israel Day Parade, we were shocked to discover that only one Jew was there while at the same time he hired Hispanic and other non-Jews, dressed them with tzitzit and Nachman kippot and had them hold his sign as if they are Jews," Rabbi Poupko related. 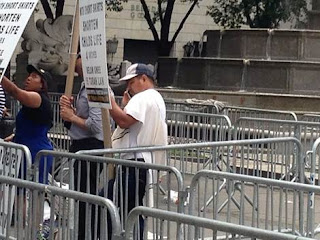 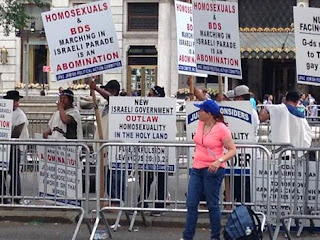 They're not making fake Jews like they used too.

UPDATE:
Characterizing this "protest" as Netueri Karta may not be accurate. The NK are not opposed to BDS.
Posted by Dusty at 8:40 PM

just another good example of what losers the whole anti-Israel crowd are. yes it is hysterical . . . and yet so pathetic at the same time.

The protesters are holding signed that are like the execrable westboro baptist church protests.

good point! cuz we all know what a charming bunch of civil right advocates those WBC folks were. it was a real sad day for me when the founder passed back in 2014. just like when helen thomas and hugo chavez died it's been so very hard to carry on sob sob.

helen and hugo can both Rest In Piss.

Maybe they hired some of those guys who pass out girlie posters on the Las Vegas strip.