A giant Swastika, created out of snap together tiles was discovered on the El Camino High School Football field, shortly after graduation. 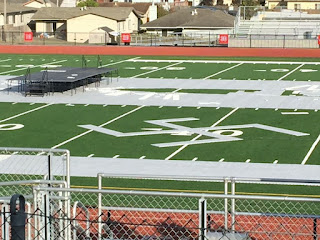 “When I saw a giant swastika on the field, I was really pissed off," said Brisbane resident Robin Belinsky, who was driving by the school and stopped to document the crime by snapping pictures and taking video.

"The Peninsula has been a very accepting community, but these types of incidents need to be brought to the public's attention," she said. "Hate still happens."

Belinsky, who is Jewish, grew up in Pacifica and recalled dealing with incidents of anti-Semitism while in school. The stay-at-home mom wants to make sure her 2-year-old son doesn't have to deal with similar situations.

"More than likely it was stupid kids, but it's just not acceptable," she said.

Anyone with information involving the matter is asked to call the South San Francisco Police Department at (650) 877-8900.