Asghar Bukhari is one of the founders of the Muslim Public Affairs Committee UK (MPACUK). No stranger to controversy, Bukhari was taken to task for his donations to Holocaust denier David Irving. During the Gaza War, Bukhari wrote "Muslims who fight against the occupation of their lands are 'Mujahadeen' and are blessed by Allah. And any Muslim who fights and dies against Israel and dies is a martyr and will be granted paradise ... There is no greater oppressor on this earth than the Zionists, who murder little children for sport." .

Yet there may not be a better window into Asghar Bukhari sole, er, soul than his weekends facebook entry, where he claims that "Zionists" (who else would do such a dastardly act?) broke into his home and stole a shoe. 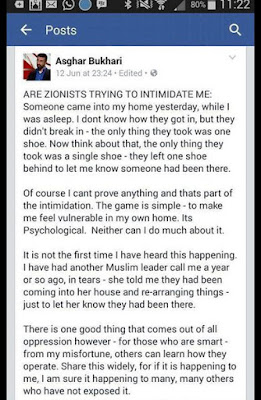 The response on social media was priceless

Dear @AsgharBukhari, we might have gone a bit overboard with the shoe-snatching last night. Which one is yours? pic.twitter.com/JoleMSpSMl
— Zionist Federation (@ZionistFed) June 13, 2015

True to form, Asghar Bukhari responds with all the humorlessness and self righteous indignation we've come to expect from the haters:

Funny thing is the zionists now trying to desperately hide their game of intimidation on my Twitter feed. Bit late the horse has bolted
— Asghar Bukhari (@AsgharBukhari) June 13, 2015

UPDATE
Ambassador Lenk comes clean (proving again, that we are the ones with a sense of humor)

LOL. The mainstream media has picked up on this! From the International business times: Asghar Bukhari warns 'Mossad shoe-stealer' is on the loose

Also Haaretz
Could the Mossad really be such heels?
http://www.haaretz.com/blogs/routine-emergencies/.premium-1.661019