Who said doing the same thing over and over again was a sign of mental illness?

We can’t blame you if you haven’t heard about the latest blockade runners to Gaza.

We’re bored of them, too.

The latest ship, the Swedish "Marianne" was intersected at sea today.  Its "essential humanitarian aid" consisted of one solar panel.  The following statement was issued from Israel Prime Ministers Netanyahu's  following the Navy Action.

"I would like to commend the sailors and commanders of the Israel Navy for their determined and efficient action in detaining the passengers on the ship that tried to reach the Gaza coast in contravention of the law. This flotilla is nothing but a demonstration of hypocrisy and lies that is only assisting the Hamas terrorist organization and ignores all of the horrors in our region. Preventing entry by sea was done in accordance with international law and even received backing from a committee of the UN Secretary General.

Israel is a democracy that defends itself in accordance with international law. We are not prepared to accept the entry of war materiel to the terrorist organizations in Gaza as has been done by sea in the past. Just last year we foiled an attempt to smuggle by sea hundreds of weapons that were destined for use in attacks against Israel's citizens.

There is no siege on Gaza. Israel assists in transferring goods and humanitarian equipment to Gaza – approximately 800 trucks a day that have recently brought into Gaza more than 1.6 million tons of goods. Moreover, Israel assists in hundreds of humanitarian projects, through international organizations, including the building of clinics and hospitals.

Israel is a state that seeks peace and acts in accordance with international law so that its people can live in safety and its children grow up in peace and quiet."

The following is a copy of the letter that was issued last night:

You seem to have gotten lost. Perhaps you meant to sail to a place not far from here – Syria, where Assad's army is slaughtering its people every day, and is supported by the murderous Iranian regime.

Here in Israel we face a reality in which terrorist organizations like Hamas try to kill innocent civilians.  We defend our citizens against these attempts in accordance with international law. Despite this, Israel transports goods and humanitarian aid into the Gaza Strip – up to 800 trucks a day. In the past year we enabled the entry of over 1.6 million tons of products, an average of one ton per person in the Gaza Strip. By the way, these supplies are equivalent to 500,000 boats like the one you came in on today.

Israel provides assistance to hundreds of humanitarian projects through international organizations, including the building of clinics and hospitals.

There is no siege on the Gaza Strip, and you are welcome to transfer any humanitarian supplies for the Gaza Strip through Israel.

Barring the entrance of boats and ships into the Gaza Strip is in accordance with international law, and was even backed by a committee commissioned by the United Nations Secretary General.

If you were truly concerned about human rights, you would not be sailing in support of a terrorist regime which summarily executes citizens in the Gaza Strip, and uses children as human shields.


If you were to travel around in Israel, you would see for yourself that the only stable democracy in the Middle East guarantees equality for all its citizens and freedom of worship for members of all religions; it is a country that upholds international law so that its people can live in safety and its children grow up in peace and quiet."

UPDATE: A list of Flotilla Participants has been released: 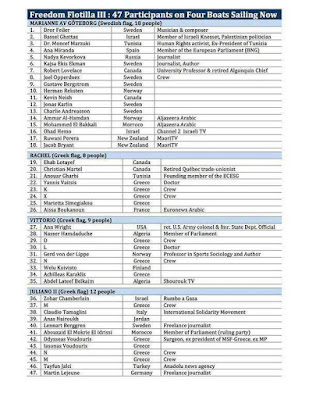 every terror flotilla becomes less news worthy then the last. but what really pisses me off the most is these arab MKs that ride these terror flotilla's and then come back to work the next day almost as if nothing happened. could you imagine a sitting US senator doing something like that and what would after wards!? the political correctness in Israel makes me sick.