Slap on the wrist for Berkeley SJP

In direct violation of campus policy, UC Berkeley's Students for Justice in Palestine distributed several hundred fake eviction notices under the doors in Unit 2 during "Israel Apartheid Week".  Its the same tired old tactic we've seen for years by a group desperate to be noticed.

Via the Daily Cal

“We do not allow any solicitations out of respect for the students residing there,” said Adam Ratliff, spokesperson for the campus’ Division of Student Affairs, in an email. He said he is not aware of any planned response to SJP for breaching dormitory policy.

No, there was no consequence to this breach of the Code of Student Conduct. Yet again,  the spoiled children of SJP  have been allowed to flagrantly violate campus rules with impunity by campus administrators too spineless to endorse their own guidelines. 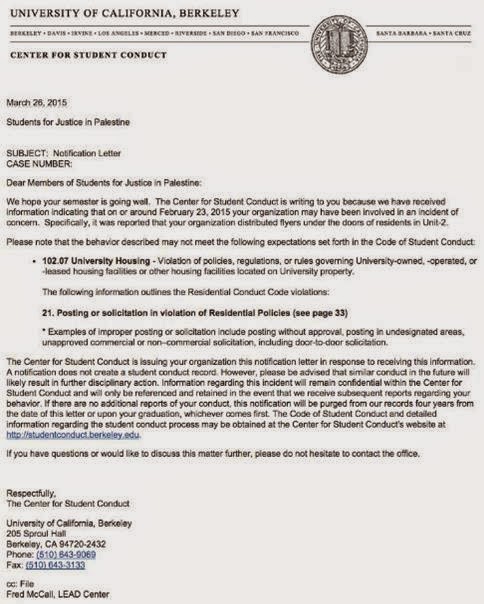 Sue the administration for not enforcing, or selectively enforcing school policy.

Pat Condell recently posted a brilliant video that perfectly describes the culture of many universities these days in particular those that pander to the radical left
https://www.youtube.com/watch?v=5XPHIfgFwsY