This month we celebrate the birthday of Cesar Chavez, a friend to Israel and the Jewish people.

Following the 1974 UN Resolution equating Zionism with racism, Chavez  wrote to Rabbi Sidney Jacobs of the Board of Rabbis of Southern California.

From the letter, reproduced below:


The following statement was adopted by the National Executive Board of the United Farm Workers of America, AFL-CIO

The recent United Nations resolution condemning Zionism as racism is an affront to the Jewish people who have been history’s primary victims of racism.

As an embattled minority who have suffered the humiliation and degradation of racial and economic discrimination in this country, we know first hand the ravages brought by intolerance and prejudice. This resolution will encourage the latent anti-semitism that has been a blot on world history and continues to stain the conscience of mankind

A national Home for the Jewish People is the natural and legitimate aspiration of one of history’s most oppressed minorities. We are proud to stand with our Jewish brothers and sisters in America in affirming Israel’s right to live in peace with her neighbors. As  democratic trade unions and human beings we can do no less. 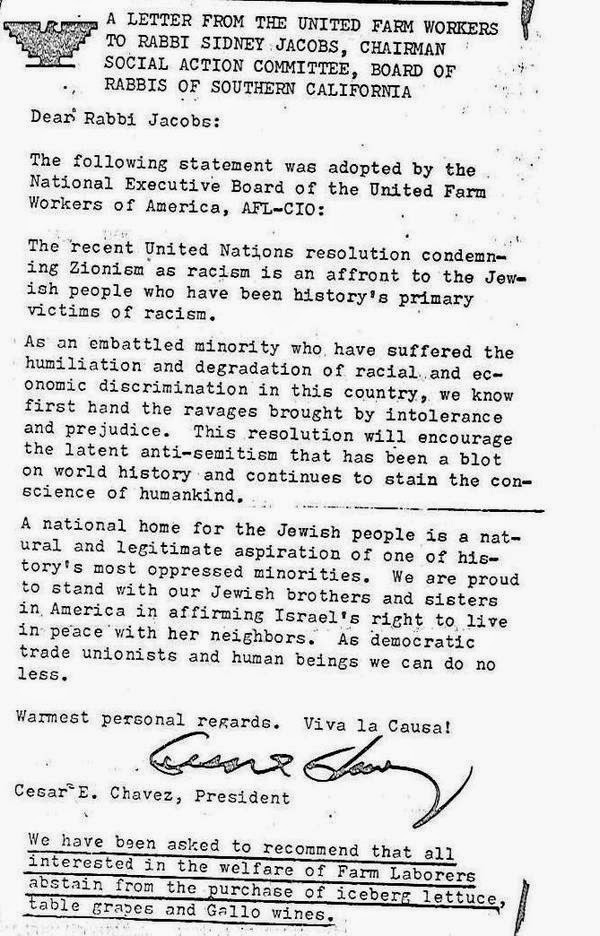