An anti-Israel candidate for student senate, Sumayya Din, at UC Berkeley decided to promote her campaign with a play on the word, "Intifada."

On this day, March 9, 2002, during the Second Intifada, 11 Israelis were killed and 54 were injured (most severely) when a Palestinian terrorist blew up a Cafe in Jerusalem.

This candidate's slogan makes light of a massive campaign of violence (The Second Intifada) in which racist terrorist organizations killed over 1,000 Israelis.

Intifada Is Murder. Not A Campaign Slogan.

A student senate candidate at the University of California, Berkeley is under fire after making reference to the murder of innocent men, women and children as part of her campaign platform.

Despite the fact the UC Berkeley recently unanimously passed a bill condemning anti-Semitism, Sumayyah Din, a candidate on the "Independent Voice" slate, made use of the term when she launched her campaign late Sunday evening.

"I am honored to have the opportunity to run for ASUC Senate as an independent candidate," wrote Din. She added:


I believe it is tremendously important for ALL students at Cal to have a voice in our student government and I want to represent my communities in this space. My vision encompasses a collaborative force on campus that utilizes our collective identities for an inclusive campus climate. I hope to move forward with the utmost transparency, compassion, and vigor. Vote the Independent Voice for an Independent Choice! #DIN4THEWIN #DINASTY #DINTIFADA #DOIT4THEDIN

An intifada is defined literally as "uprising" or "resistance." During Palestinian intifadas, attacks have included Islamist suicide bombers detonating themselves in public areas within Israel and have led to the deaths of hundreds of innocent men, women and children of all faiths. Din edited her post and removed the intifada reference hours after posting.

Can't help but wonder if those who dismiss this as a  "manufactured controversy" feel that way about campaigns against made in New Jersey hummus, or boycotts of Israeli modern dance troupes. 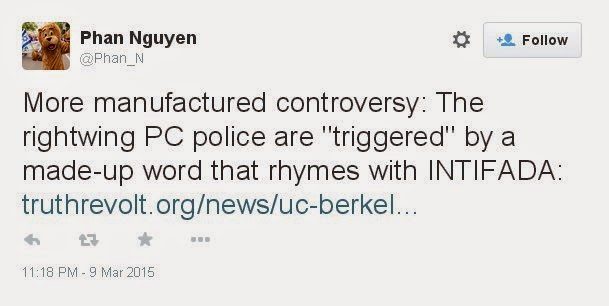 Where is MUSLIM Voice for Peace - or is that too Counter Revolutionary and Islamophobic to be for Peace?

There ain't one? WHY NOT?