The 2015 AIPAC Policy conference was the largest ever, with over 16,000 supporters of strong bonds between Israel and America attending.  Of those, 3,000 were college students, ground zero in the campaign against Israel.  A variety of fringe groups protested the event. Jewish Voice for Peace proudly stood shoulder to shoulder with notoriously anti-Semitic groups in its protest of the conference. The group was silent as a Hezbollah terror flag was unfurled at their protest.  Later that week, the same groups joined forces to protest Israeli Prime Minister Netanyahu's speech to Congress

In an email, Hatem Bazians' American Muslims for Palestine boasted of the alliance, which also included such fringe groups as the Neturai Karta and Code Pink 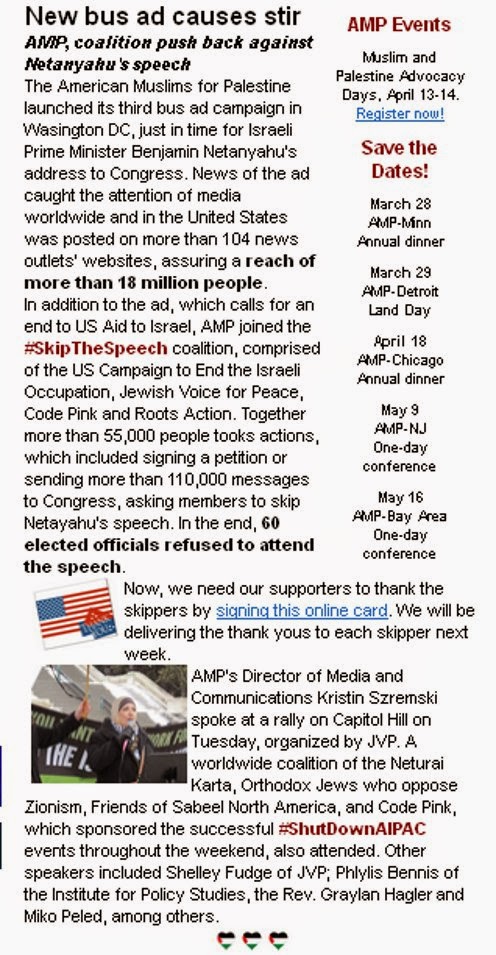 In Algemeiner, Yizthak Santis asks  "Why is a self-styled “Jewish organization” collaborating with rabid anti-Israel campaigners, including antisemites?", chronicling how Jewish Voice for Peace's partnership with groups that use anti-Semitic rhetoric belie its claims  that “as Jews, we have no tolerance for antisemitism”

With such partners, it should come as no surprise that JVP endorses the Boycott, Divestment and Sanctions (BDS) movement. This is consistent with JVP activities such as attempting to block ZIM cargo ships from unloading in Tampa and in Los Angeles, participating in the Free Gaza flotillas, and raising funds for the anti-Zionist International Solidarity Movement.

Why does JVP associate itself with such radical, hateful organizations? Perhaps it is because they share the same goal: Israel’s demise. To this end, JVP advances a one-sided anti-Israel narrative, refers to Israel as an “apartheid” state, and lobbies to distance the United States from Israel. JVP views itself as the “Jewish wing of the Palestinian Solidarity movement” and is an integral part of this anti-Israel coalition, serving as its “Jewish shield,” washing away the moral stain of antisemitism from their partners’ records.

Given JVP’s emphatic statement that “as Jews, we have no tolerance for antisemitism,” the organization should be the first to speak out against its allies’ antisemitic rhetoric. Yet JVP remains silent, showing it has a blind spot when anti-Jewish hate emanates from its anti-Israel comrades. This willingness to consort with antisemites hiding behind an anti-Zionist façade says much more about JVP’s character than Israel, the sole target of its vitriolic and obsessive criticism.

Where is MUSLIM Voice for Peace - or is that too Counter Revolutionary and Islamophobic to be for Peace?