JVP Attempts to get its Foot in the Door at UCLA

Jewish Voice for Peace is desperately trying to expand its reach into college campuses. If you were JVP and were anxiously trying to scrap a foothold into UCLA, where would you do your recruiting?

Yep.  You guessed it. The group most compatible with JVP's narrow focus is none other than Students for Justice in Palestine.

The Students for Justice in Palestine website is now promoting and recruiting for Jewish voice for Peace members- among its own ranks. Adding insult to injury, their meeting place of choice is Hillel's own kosher cafe.

And again, in glorious close-up 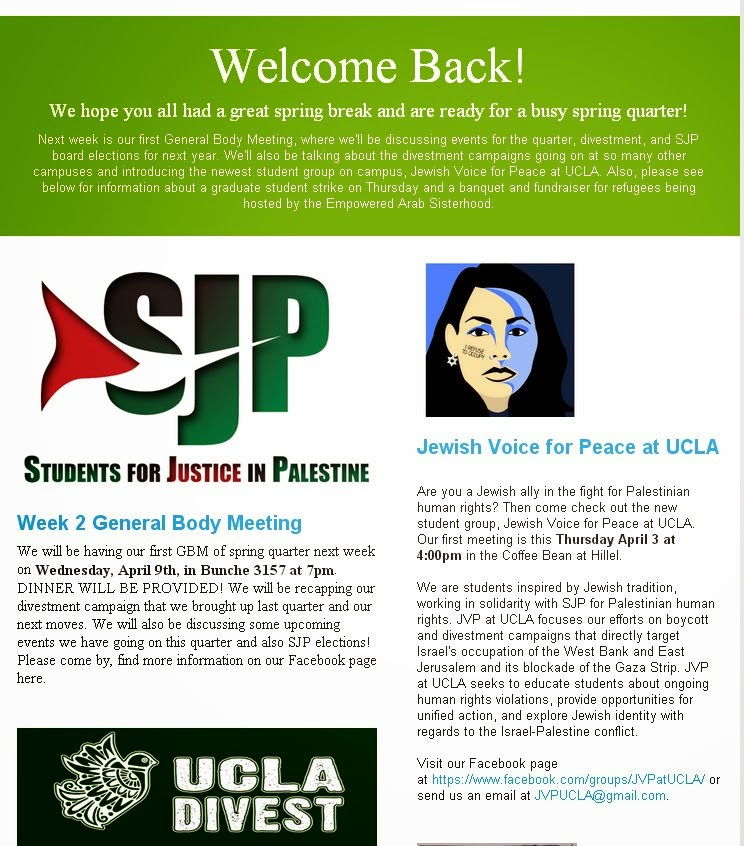 Jewish Voice for Peace is attempting to create a subset of SJP members to provide cover and legitimacy when the antisemitism of the SJP's agenda is exposed..  And yes, denying the Jewish people the right to self determination is anti-Semitic.

We've seen this phenomenon before . Its been dubbed "Jew-washing"

From the Jewish press

"There is nothing heroic or brave about Jews giving a “kosher hechsher” to movements and ideologies such as BDS that seek to undermine the right of the Jewish people to sovereign equality.  Let us call this activity by its rightful name: Jew-washing, and give priority to countering strategically and consistently its deceitful methods and destructive intent."

Email ThisBlogThis!Share to TwitterShare to FacebookShare to Pinterest
Labels: Jewish Voice for Peace, JVP, Students for Justice in Palestine, UCLA

The perfect marriage between the brown shirts and the kapos.

From the River to the Sea...

palestine Will Never Be!

Where is the "Muslim Voice for Peace"?

Only "Muslim Voice for Jihad".

I swear did not know those are two different organizations.