There is more "Lets pretend" going on in the BDS movement than in the Magic Kingdom. With Palestinians thrilled to work at Sodastream, happy to buy and sell Israeli products, perfectly fine riding Veolia's  Jerusalem light rail, this "Palestinian civil society" we hear so much about seems as real as Cinderella's fairy godmother.  Also in the realm of fairy tales is the claim that BDS is a grassroots movement.

In the Times of Israel, Max Samarov exposes yet another dark and dirty secret regarding BDS on campus. Its not a student led initiative- the author of the Loyola divestment resolution was a paid BDS operative.

On Tuesday, April 1st, Students for Justice in Palestine presented the Loyola student government with an anti-Israel divestment resolution. But what they neglected to mention was that they didn’t write the legislation themselves. It turned out that the real author was Dalit Baum, a major leader in the global Boycott, Divestment, and Sanctions (BDS) campaign against Israel. Baum is not a student or faculty member of Loyola or any North American university. She is a paid operative working to co-opt student governments into following the BDS Movement’s malicious, anti-Israel agenda. And if she is writing resolutions for one school, it is likely that she is writing them for others as well.


Dalit Baum is locally well known as an anti-Israel activist. Formerly the "Director of Economic Activism for Palestine" at Medea Benjamin's Global Exchange, she is now working for the American Friends Service Committee. She'll also be a camp counselor at the JVP divestment camp this summer. 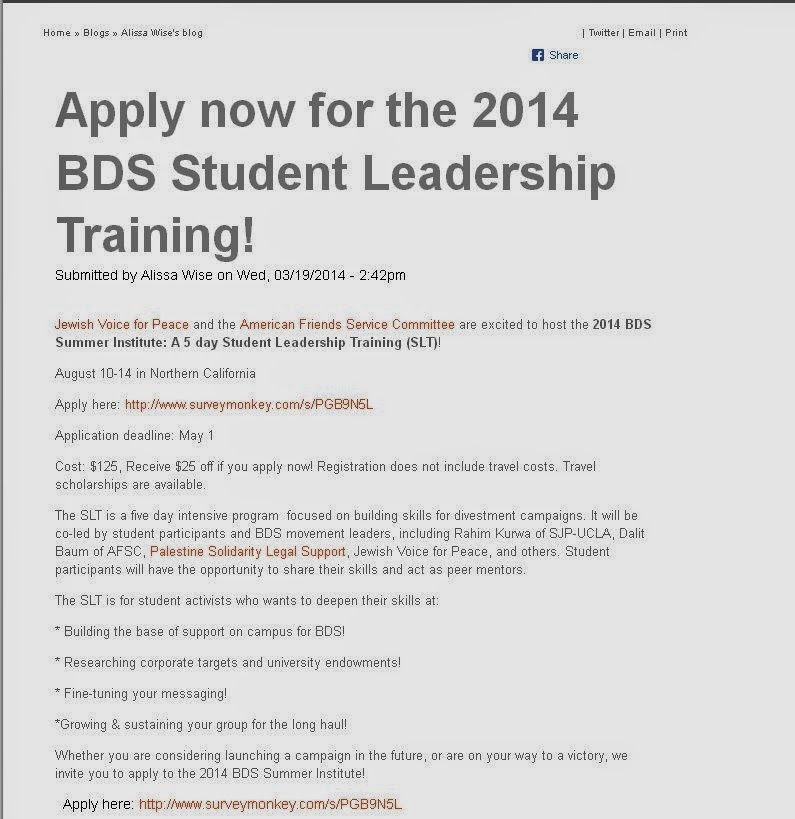 You may remember Dalit from the attack on Cliff's,  our beloved local hardware store or from showing up in her pajamas to protest a FIDF fundraiser.

Are Israel's leftists pure ideologues or guns for hire? Yotam Feldman, who was born into the leftist camp – his father is liberal lawyer Avigdor Feldman – believes the latter.

In a Hebrew language post at the "Eretz HaEmori" blog, Feldman says that in his life, he has witnessed how Israel's "human rights movement" became a source of income for its activists. He relates how his father's old Subaru "gradually turned" into a BMW, and how the family moved from a rented apartment in Yafo to a spacious Tel Aviv apartment. "

"It is a well known but seldom stated fact that a very large part of the leftist activists in Tel Aviv earn their salaries in different ways from the human rights branch. Many of the prominent – and often most vocal – activists in the demonstrations are paid spokespeople, PR people, producers and organizers and of course, lawyers who man the tip of the pyramid in these groups."

"This is a pretty confusing situation because when you are standing in a demonstration or even just engaging in idle talk, it is not clear if the person next to you is expressing his opinion as a result of inner conviction or as an inseparable part of his job…"
No, its not quite as "grass roots" as the anti-Israel activists would have you believe. It never has been.
Posted by Dusty at 9:18 PM