As the co-founder of Global Exchange and Code Pink , Medea Benjamin is at the forefront of the BDS movement except apparently, when it interferes with her own opportunities for financial gain.  As  Medea Benjamin is confronted by her peers regarding her foundations' investments in Caterpillar the explanation  spin has taken some curious routes.

Via Twitter:
In this discussion, Benjamin Doherty 's (@bangpound)  protected tweets seem to imply that this was  a strategy to allow Medea to vote at Caterpillar shareholder conferences, but that assertion is challenged by  Daniel Shunra, who asserts that the $120,000 investment is beyond what is needed to vote. 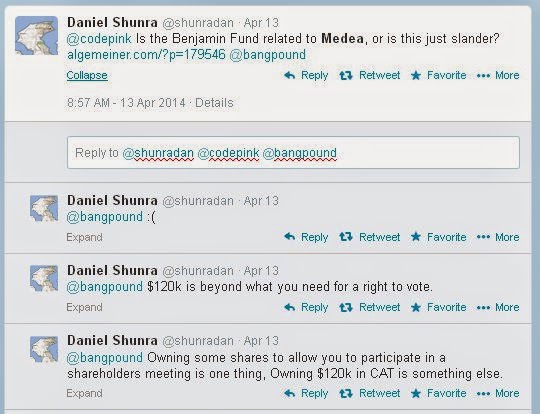 Alli McCraken, one of Medea's employees at Code Pink claimed that the investment was a holdover from the days when Medea's father ran the Foundation 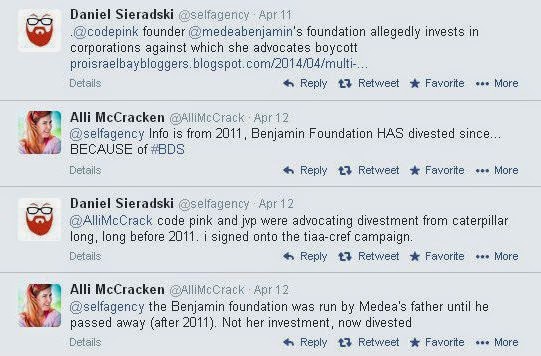 Financial disclosure forms indicate that Susan Medea Benjamin was in control of the Benjamin foundation from at least 2009, so no, Alli.  Nice try, though.

Incidentally, the 2012 990s  for the Benjamin  Foundation no longer list Caterpillar as an asset, but  holdings in Intel and General Electric, also touted as "complicit in the occupation"  remain.

The take-home lesson from this episode?   For at least some  "progressive" ideologues,  profit trumps politics.  Medea Benjamin is a true 1 per-center

"OFF WITH HER HEAD!"