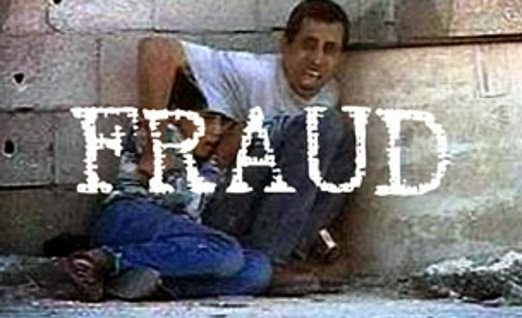 It might very well be the image that launched the second intifada. A visibly terrified father and son were caught in the crossfire of a shoot-out between Israelis and Palestinians in Gaza. When the shooting stopped, the boy was dead. Or was he?

Via the Jewish Virtual Library


On September 30, 2000, a number of Palestinians - including policemen - attacked an IDF outpost at the Netzarim junction using Molotov cocktails and automatic weapons. The soldiers returned fire toward the sources of the shooting. During the exchanges of fire, a Palestinian child - Mohammed al-Dura, aged 12 - was apparently hit by gunfire and killed.

Immediately following the incident, the France 2 TV station released footage from the scene that seemed to show the boy being killed during the course of the fighting. The images of the boy cowering behind his father were broadcast around the world and Israel was universally blamed for al-Dura's death.

At first, the IDF accepted responsibility for the boy's death. Subsequent investigations, however, have revealed that this story was far more complicated than the video supposedly showed and that the boy, if killed at all, was most likely hit by Palestinian bullets and not IDF fire.

Following an internal IDF investigation of the incident released in November 2000 which found that al-Dura was likely killed by a Palestinian policeman and not IDF fire, Israel retracted its original claim of culpability for the childs death. The investigation noted that its results were not conclusive, but Maj.-Gen. Yomtov Samia noted that "the possibility that [al-Dura and his father] were shot by Palestinians is higher than that they were shot by Israelis."

Maj. Gen Samia added that the conclusions of the investigation were based on an in-depth analysis of all information the IDF could gather about the incident; however, he added that a number of questions about the incident remained, including why al-Dura and his father Jamal, 37, of the El-Bureij refugee camp, had even come to the intersection when the fighting there had already lasted several hours.

In 2004, French media commentator Philippe Karsenty suggested that France 2 edited portions of the  original footage where Mohammed is seen lifting his hands and moving his legs, proving that he was not actually killed. Karsenty also accused the station of staging the scene with Palestinian protesters with the goal of demonizing Israel

Philippe Karsenty will be in the Bay Area later this month. Come hear him: