Note to Bay Area Anti-Zionists: How does it Feel to be irrelevant?

The spectacular San Francisco Davies hall hosted the Israeli Philharmonic on Feb.27and 28th. The 2,743 seat venue was filled to capacity with lovers of fine music and lovers of Israel.

An attendee reports:
I think that people who attended the IPO concert really appreciated the warm welcome from all of our people with the beautiful Israeli flags. There was some buzz about it all. Very festive! I was happy to look out at intermission and to see the police and security people.
As for the concert, it was out of this world! People jumped to their feet at the end of Mahler's 5th. Sensational!
Tonight, the orchestra played an encore. It was Johann Strauss waltzes, and the audience was so enthralled with the Viennese schmaltz. It was beautiful. I imagined myself in a tremendously graceful waltz with someone I like very much.
I think the most moving part of each evening was at the start of each program. The IPO played the Star Spangled Banner and followed with HaTikvah. They stood, and so did every single person in the symphony hall. There were also the flags on the stage - the American flag on the left and the Israeli flag on the right. You can imagine the height of the pride!

Contrast that with the press release sent out by Jess Ghannam to the Al Awda mailing list, highlighting the self absorbed narcissism of Camp Hate. Even the title of their press release "Bay Area community members say “Drown Out Apartheid” at Israeli Philharmonic in San Francisco" shows the extent of their denial of reality. No Jess, the Bay area community showed their support of the only democracy in the Middle east by turning out in thousands to hear the orchestra. The two dozen haters you sent over from QUIT were simply irrelevant. 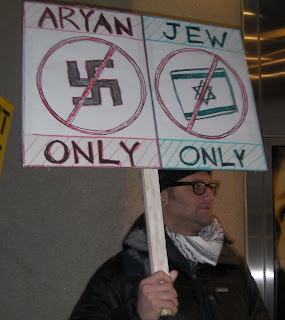 February 27 – Fifty members of the Bay Area human rights community protested the Israel Philharmonic Orchestra’s (IPO) performance at Davies Symphony Hall on Sunday evening, using chants, songs and street theater to highlight the IPO’s role in whitewashing Israel’s apartheid policies against the Palestinian people. The orchestra’s performances are being met with protests in six of the seven cities on its US tour, including a protest last Tuesday at Carnegie Hall in New York and at Seattle’s Benaroya Opera House on Saturday night.
Concert-goers were greeted with a checkpoint proclaiming “Palestinians Must Stop, Israelis Can Go Around,” modeled after checkpoints wait in the West Bank where Palestinians are frequently forced to wait for hours. The checkpoint was guarded by soldiers armed with musical instruments morphing into guns. Protesters carried signs reading, “Don’t Harmonize With Apartheid,” “Israel Fiddles while Palestine Burns,” and “Justice Presto, Not Lento.”
The protest also featured a kazoo band. Demonstrators banged pots and pans and blew whistles while chanting “drown out apartheid.”

Jess went on to make this scurrilous accusation " One fur-clad concert-goer tore up the mock program and stuffed it down the brassiere of the woman who offered it to her". To which I can only say: She would have needed the "Jaws of life" to accomplish that feat. 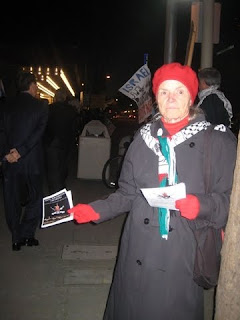 Giving out fake flyers
Posted by Dusty at 11:01 AM